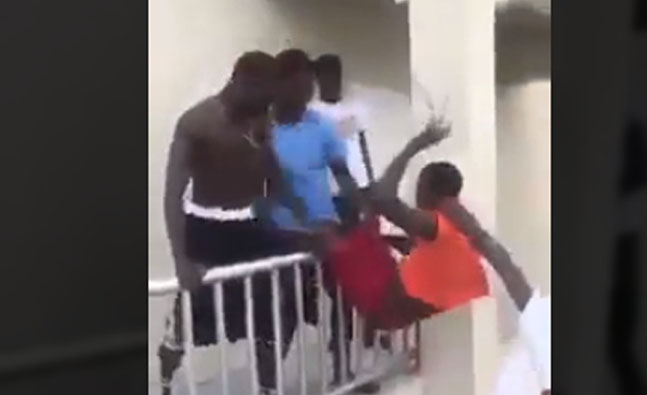 Providenciales, Turks and Caicos – October 20, 2017 – The Police will get the report says the Member of Parliament for Five Cays after a video of bullying at the government owned Felix Morely Community Center in Five Cays was posted to a US website.

The video goes on for 55 seconds and shows a group of young men, beating up on another young man. There is cursing and jeering and though the guys appear to be having fun, the one fellow under attack is angered by the abuse and is seen constantly trying to get away. At one point, he is hung upside down from the guard rail at the entrance door, as he is hit over and over again with what appears to be a stick.

Magnetic Media was sent the video, which was on October 14 uploaded to #WorldStarHipHop website, a 12 year old video blog site where it has gone viral – 278,716 views, attracting some 2,325 comments and 170 Facebook likes.

The video under the title, ‘Teenagers bully new kid to the neighborhood’ and uploaded by someone named, ‘Joe’, is concerning especially since it is taking place at a public community center.

The MP for the area, also the Deputy Premier said, “that is a very disturbing video and I will ensure the police investigate it immediately.”