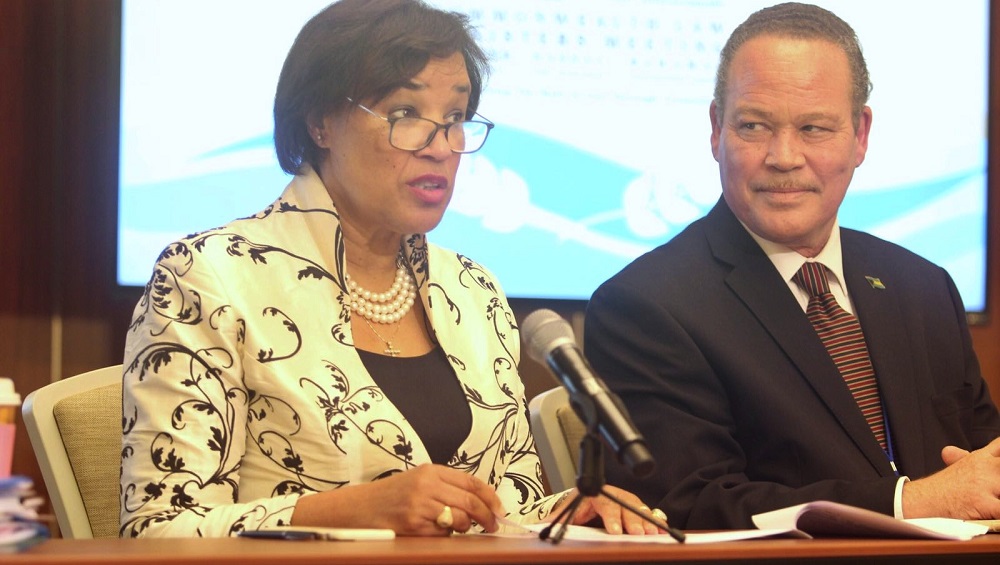 #Bahamas, October 25, 2017 – Nassau – Commonwealth Law Ministers met in Nassau for four days to discuss law reform for civil and criminal justice, and the application of the technology to achieve objectives.   The conference was held at Baha Mar convention centre, October 16-19, 2017 under the theme “Strengthening the Rule of Law Through Technology.”

Commonwealth Secretary General, the Rt. Hon. Patricia Scotland (Baroness Scotland), Q.C. told the media in the Closing Press Conference: “We know that our Commonwealth jurisdictions are facing many challenges today.   So, this was a really important moment for us and I thank the Bahamas Government and the Attorney General, the Hon. Carl Bethel, Q.C. for generously hosting us.”

She said: “The whole point of this conference was to bring the Law Ministers together to be able to discuss issues of common interest and to produce packages and tools to assist all our Ministers; and I believe we have achieved our aim.”

“Each of these topics has important bearings on the everyday lives and livelihoods of Commonwealth citizens and on their personal welfare and individual dignity.   The outcomes of their discussions, I am confident, will help countries to uphold the Rule of Law and deliver to these citizens a justice system that is fair and efficient and responds to modern challenges,” said Baroness Scotland.

“Understanding these challenges, Law Ministers have emphasized and agreed on a number of key points.  With regards to the theme of ‘Strengthening the Rule of Law through Technology’, Ministers looked at technology’s ability to promote efficiency, accuracy, quality of services, and long-term cost effectiveness in many areas including the preparation of legislation, the use of video and teleconference systems in court proceedings, police, and prosecution and court case management systems, e-filing and documentation, legal and digital identity, and more effective communication with and between law enforcement and justice institutions,” she said.

She added that the Law Ministers proposed that small and developing countries be supported “through the sharing of best practices and solutions from across the Commonwealth to develop technologies that can improve their justice systems.”

The Baroness balanced the Ministers’ conclusions with: “They also looked at the other side of the coin — the challenges technology poses, including threats to privacy and issues of cyber security.   At the meeting, the Commonwealth presented a new secure messaging mobile app, which will be trialed in 2018.   This app will help countries collaborate to tackle cross-border organized crimes and cyber crimes.  The Law Ministers agree, that in order to meet their sustainable development goals, they need sound legal frameworks to develop and improve health, education, employment, financial and other critical services.”

She continued, “They discussed how they will work with law reform bodies, national parliaments, the judiciary and law ministries to make their aspirations a reality.  They also turned their attention to the fight against terrorism.   Ministers considered a raft of recommendations, including strategies to review and strengthen legal frameworks and legislation to prevent the grooming and recruitment of foreign terrorists, and to stop them from crossing borders and being funded.”   The Law Ministers agreed to share experiences and put in place measures to address the phenomenon of foreign terrorists, in line with the United Nations Resolution 2178.

“They also agreed that non-coercive measures should be adopted, when necessary and/or in combination, with criminal justice approaches that where appropriate, member countries can be able to rehabilitate and reintegrate returning terrorists and stop the recruitment, training and organizing, transporting or equipping of anyone to commit acts of terror,” said Baroness Scotland.

“On the issue of countering violent extremism, Ministers agreed that coordinated action and drawing on lessons learned from right across the Commonwealth was essential as a way forward.   They also emphasized that tackling the issue of extremism online was best achieved through cooperative engagement through global communications service providers.   Regarding the implementation of international humanitarian law, Ministers reiterated its importance and committed to consider ways to promote and implement these laws in their countries.”

Baroness Scotland added that Law Ministers also discussed Child Early and Forced Marriage and expressed their strong support for its prevention and elimination.

“They recognized Child Early and Forced Marriage as one of the barriers to the achievement of sustainable development; the full realization of human rights for women and girls, and the elimination of violence against women and girls,” said The Baroness.

Baroness Scotland emphasized that Law Ministers stressed the need for practical and technical assistance, in dealing with the challenges of climate change.

“The focus on national implementation of the existing global framework for climate change as contained in the United Nations Framework Convention on Climate Change and the Paris Agreement.

“Ministers highlighted the importance of effective laws to support the smooth operation of relief efforts during and after natural disasters including the accountability of relief agencies and the import, export and transit of emergency items,” said The Baroness.

“We have responded positively to their requests to continue to cooperate with other international organizations including the international federation of Red Cross and Red Crescent societies and the British Red Cross to help countries review and strengthening their legislation.”

Baroness Scotland also said, “These are just the highlights of the critical discussions that took place during the course of the meeting.  To assist governments to turn to their aspirations into action, we have offered them some new tools: Our new ‘Legislative Drafting Handbook and Guide to Law Reform’ will help countries to implement effective legislation in a host of areas, including climate change, ending early enforced marriage, and gender equality.   It would particularly be of value for small jurisdictions, facing unlimited challenges to drafting or reforming legislation.”

According to Baroness Scotland, the Commonwealth Secretariat’s Legal Exchange is a knowledge portal that will support member countries by providing access to the laws of 52 states.   The website is one of the series of products from the Office of Civil and Criminal Justice Reform launched by Baroness Scotland in July, and would provide technical assistance and an online platform with best practice guides, model law standards, templates and legal insights on climate change, human rights, and a whole range of other issues, aimed at supporting governments wishing to either advise existing laws or draft new legislation.

She concluded the meeting with the press conference adding that the legal exchange website contains the database of statutes and Commonwealth model laws, which have been digitized, categorized, and cross-referenced, making it easier for governments and Law Ministers to access and download.  The site also provides an online community of practice for government lawyers from across the Commonwealth, enabling countries to share information on current law reform initiatives.