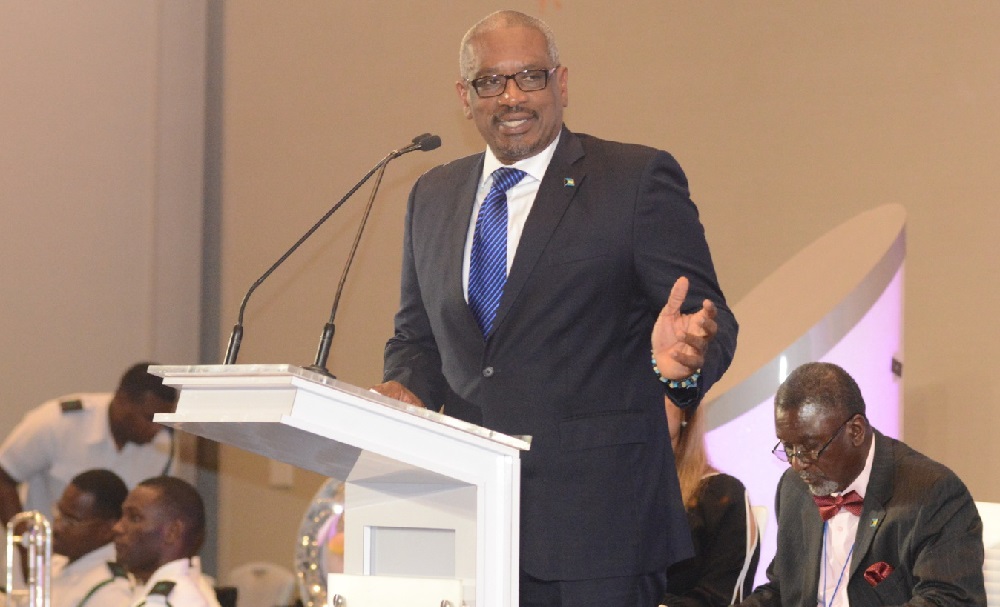 Addressing the Opening Session of the Meeting of Commonwealth Law Ministers and Senior Officials, which got underway Monday at Baha Mar Resort, Prime Minister Minnis said the fact that all of the Commonwealth Countries now operate in an increasingly interconnected and globalized world, brings certain challenges with it for the grouping’s “legitimate financial systems.”  The Meetings conclude on Thursday, October 19, 2017.

“We are connected by global financial and trade systems and by technologies which facilitate instantaneous communications, monetary transfers and other transactions,” Prime Minister Minnis said.

“These technologies and transactions often defy the very notion of borders between States.   This connectivity has also exposed us to the spectre of transnational crime, and to individuals who would use our legitimate financial systems to launder criminal proceeds and to finance groups and entities who would seek to destabilize these systems and our countries.”

Prime Minister Minnis challenged officials to continue to work within the framework of the international policies and standards set by multinational institutions such as the International Monetary Fund (IMF), the Organization for Economic Cooperation and Development (OECD), and the Financial Action Task Force (FATF) to safeguard against the abuse of the group’s financial institutions.

Prime Minister Minnis said there is quite a bit Commonwealth countries can accomplish as a group, to level the playing field and to keep countries on the cutting-edge of legal responses to these threats.

“In this regard, the work of the Secretariat in producing the ‘Revised Common Law Legal Systems Model Provisions on Money Laundering; Terrorist Financing; Preventive Measures and the Proceeds of Crime’ is to be commended.   “Its provisions can be adopted to fill various gaps or deficiencies in national legislation,” Prime Minister Minnis said.

These model legislative provisions relating to money laundering, terrorism financing, proceeds of crime, civil forfeiture and sanctions are the outcome of a collaboration between the Commonwealth Secretariat, the International Monetary Fund (IMF) and the United Nations Office on Drugs and Crime (UNODC).

The model provisions form a starting point for states to evaluate the measures that should be incorporated into their domestic law to prevent, detect and effectively sanction money laundering and terrorism financing and to recover the proceeds of crime, with the overall objective of maintaining compliance with the revised Financial Action Task Force (FATF) Recommendations.