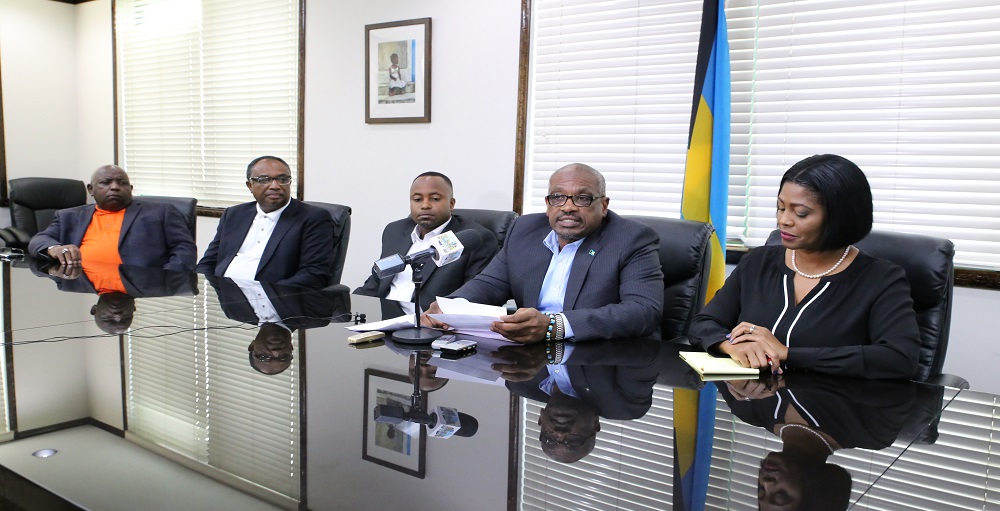 #Bahamas, September 23, 2017 – Nassau – Prime Minister, Dr. the Hon. Hubert A. Minnis said on Friday at a press briefing, his monthly visit produced productive meetings to help revitalise the economy of the island.

During his second monthly visit to Grand Bahama, the Prime Minister stated that he made the commitment to do this so as to be intimately involved in the revitalisation, re-growth and rebranding of the island.

There is also an office in Abaco, where he will also visit monthly, along with a commitment to establish an office, although it may be temporary, in Exuma, Eleuthera and Central Andros.

“We are committed to working with the GBPA in order to eliminate all road blocks in investment. We are dedicated to streamlining our investment process with the first step being the creation of an Investment Unit in Grand Bahama.

“Our government will review our Immigration, Customs and Exchange Control policies with a view to creating a formula to making it easier to invest and do business in Grand Bahama.”

Acknowledging the urgency of the redevelopment of the Port Lucaya strip, the Prime Minister noted that the government is working diligently to complete the best deal. He said the island’s tourism product needs to be revived.

“Therefore, our discussion with the owner and potential partners are with a view to transforming the property into the first step of an innovative and unique destination for Grand Bahama.

“The government is committed to ensuring that the existing jobs on the strips remain.   To this end, we will continue our aggressive discussions until we can unveil our plan for a new tourism product and new destination.”

Steps were made towards the creation of the Grand Bahama Investment Promotions Board, which will be responsible for marketing the island as a destination ready to do business, among other things. “This Board will send the message to the world.”

The Prime Minister was also pleased to announce that the launch of the first in a series of Entrepreneurship Programmes.   The Apiary, or honey production programme, will begin on October 26, when some 30 young people between the ages of 17 and 25 will have the opportunity to start their own honey production business.

Minister Thompson said there will be a two-day workshop which will be open to the public. Following this, applications will be received from the potential candidates: those who are unemployed, industrious and prepared to work, to learn and to be entrepreneurs.   Additional information will follow.

What also came out of the discussions is the possibility of a second ship bringing additional cruise and stay passengers to the island.    This ship is scheduled to begin sailings in April 2018; however, said Prime Minister Minnis, there is a possibility that it will commence sailing before then.

Prime Minister Minnis will be a special guest at ‘A Taste of Port Lucaya’ and he said that it is important that he attend to show his “sincerity in the success of Grand Bahama, and I would hope that others would show just as much interest as I do in Grand Bahama, because Grand Bahama cannot grow only through the confines of Grand Bahamians. It’s all one Bahamas.”

He invited all Grand Bahamians to attend and participate.