Grenada, July 5, 2017 – St. George’s – CARICOM Heads of Government must continue to embrace the United Nations protocols on Climate Change because the livelihoods and existence of regional citizens demand that they do so, Prime Minister Dr. the Hon. Hubert Alexander Minnis said Tuesday.

Addressing the Opening Session of the 38th Regular Meeting of the Conference of Heads of Government of the Caribbean Community (CARICOM) at Grenada Trade Centre, Prime Minister Minnis announced that it is his Administration’s intention to launch “an ambitious solarization programme in The Bahamas over the next five years.”

“Our people need us to act together to harness the tremendous mutual potential of the region while facing shared challenges,” Prime Minister Minnis said. 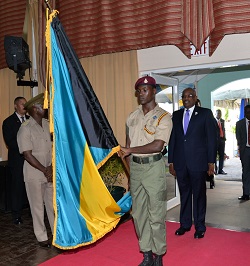 “Our region is dependent upon the resources of the sea, the blessings of the Trade Winds, and year-round ambient temperatures.  Accordingly, we must continue to embrace the UN climate protocols because our livelihoods and existence demand regional and global action to address Climate Change generally, and threats such as rising sea levels, depleted fish stocks, and the frequency and intensity of hurricanes.

“We should be diligent in putting in action, plans for renewable energy and energy efficiency from the sun, wind, the oceans, rivers and lakes,” Dr. Minnis added.

“As both of these numbers increase, we will need to increase the production of power generation, electricity and clean water,” Prime Minister Minnis said. “We will need to improve waste treatment and recycling. These challenges can only be met with renewable solutions.”

Prime Minister Minnis said regional leaders must bring the same vigor and focused discipline to the task of economic development.

“We are collectively, the most tourism-dependent region in the world. It is an area in which we have an acknowledged and decided global comparative advantage.

“Given the collective state of our fiscal positions, and levels of unemployment, we must become more focused on finding ways to extract much more value from that area of our economies,” Prime Minister Minnis added.

Prime Minister, Dr. the Hon. Hubert Minnis during Opening Ceremonies, and addressing the Opening Session of the 38th Regular Meeting of the Conference of Heads of Government of the Caribbean Community (CARICOM) in Grenada, July 4, 2017.  It is the Prime Minister’s first head-of-state CARICOM address.  (Photos/OPM Media Services)