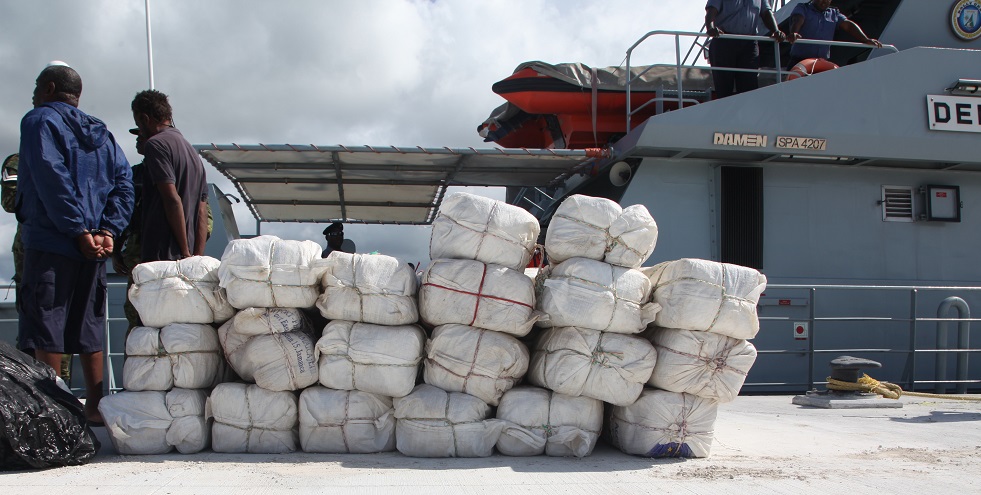 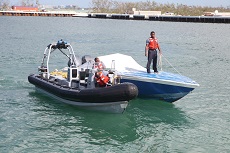 While on routine patrol in the South western Bahamas, in the area of Cay Lobos, the Defence Force vessel intercepted a 28-foot blue and white go-fast vessel.   The vessel was subsequently searched by Rolly Gray’s boarding team and a large supply of contraband, believed to be marijuana was discovered on board.

The three males on board, 2 Bahamians and 1 Jamaican, were apprehended and their contraband seized.  They were transported to the Capital where they arrived on Tuesday morning. The drugs weighed in at just over 1000 pounds with an estimated street value of over a million dollars. The men and contraband were handed over to officers of the Royal Bahamas Police Force Drug Enforcement Unit for further processing.

This arrest has been a result of the consistent efforts of the Royal Bahamas Defence Force and their strategic intent to rid the waters of the Bahamas of illicit transnational activities that threaten and security of The Bahamas.

Header photo shows: The suspected drugs along with the suspects being taken into custody after arrival into the capital.

Insert photo one shows: The 28-foot blue and white go-fast vessel laden with suspected illegal drugs being escorted into the capital by a Defence Force boarding team.