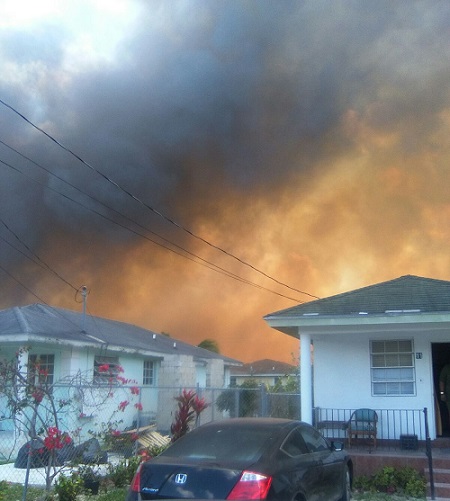 Bahamas, March 5, 2017 – Nassau – ACP Stephen Dean earlier today to Magnetic Media called it “crisis mode” as high winds and a troublesome dump are blamed for a raging fire in Jubilee Gardens, Nassau.  Dean, abruptly ended a brief report but not before confirming that teams are being mobilized to battle the inferno which one account to Magnetic Media reveals has swallowed up seven houses already.

Even more houses are on fire in the 35mph winds in Nassau today.  It is said the Fire Department is fighting a losing battle.  Prayer however changes things.  The Harold Road dump is on old problem spawning vehement rows and ongoing protests about the toxins and environmental safety hazards.  Still the eruption of a community fire today is likely well beyond the scope of what most had imagined could happen if the dump situation was not rectified.

Embers are said to have ignited the homes; families are losing just about everything.