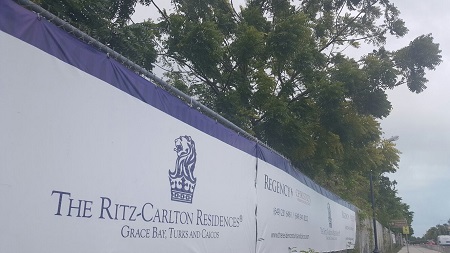 Providenciales, TCI, February 23, 2017 – The Opposition PNP is calling for the PDM Government to make an unequivocal statement about where it stands when it comes to developments like the 12 storey RitzCarlton resort which can now go forward.   Leader of the Opposition in the House of Assembly and former Finance Minister, Washington Misick believes a statement in support of these taller constructions by the new government will fend off even more litigation or any appeal.

On Tuesday the Appeals Court upheld the ruling that the Government followed proper procedure in securing the project which Hon Misick reminded should have started in mid-2015; it is a $224 million dollar investment.

In a media statement issued yesterday, Misick said:  “I am delighted that for the second time the Court has agreed that the process used to change the policy allowing for the increase of building heights in designated areas in the Turks & Caicos Islands by the former PNP Government was indeed correct. I hope that this game of attrition by the opponents of this project aimed at frustrating the developer and protecting the status quo will now come to an end.”

The Opposition Leader says the Premier has never clearly expressed her view of taller constructions, that her party’s Throne Speech promises a new development master plan which could affect the development and expressed that he has heard the Tuscany and Venetial Strata Corporations are planning to appeal again at the Privvy Council.

PNP National Chairman, Hon Royal Robinson also comments and is putting pressure on the PDM Administration to ensure the RitzCarlton project comes to fruition; he cited its take off as tremendously beneficial to the people of the TCI.