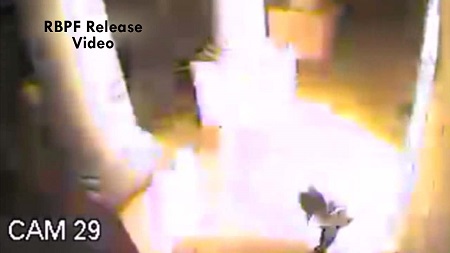 Nassau, Bahamas, February 1, 2017 – Police have released video of the arsonist who around 5am on Monday set fire to the Magistrate’s Court on Nassau Street.  It shows the man moving suspiciously around the entrance of the building, going into the foyer, peering into the foyer and then trying to get a lighter going strong enough to catch something already inside that entrance, ablaze.

Whatever the man, who appears to be a young person, placed inside the foyer was extremely flammable as he himself had to, as we say in island vernacular, break off running once the fire caught.  There was a big explosion it appears.
ACP Stephen Dean, who last night released that video, says that the Fire Department actually did put out the blaze.  There is now an intense investigation on; the Public is being asked for help in identifying the arsonist.
You can watch the video on our Facebook page, like MagneticMedia Fanpage.
#MagneticMediaNews