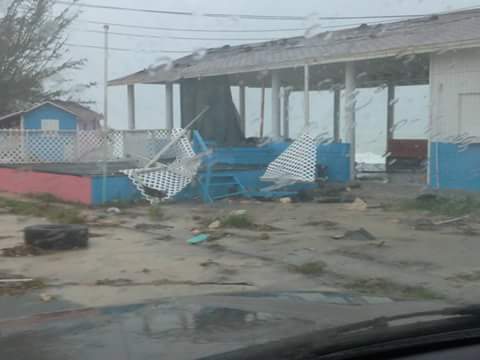 Providenciales, TCI, October 6, 2016 – It was a series of changes in the movement, size and encounters of Hurricane Matthew which worked in tandem to bring a blessing for the Turks and Caicos Islands; Hurricane Matthew did no damage and life as usual resumes today for the TCI.
The storm shrunk in size, and that meant the Turks and Caicos archipelago fell outside of the most dangerous winds and was spared the brunt of the storm which has killed and caused grave devastation.
The All Clear for the Turks and Caicos came around 4pm on Wednesday; about two hours after the Tropical Storm warning was lifted and this allowed the DDME time to ensure conditions around the country were indeed safe.  Matthew dropped very little rain and brought tropical storm force winds and gale force winds to this chain of islands.
Right now and since 4am, the system is battering Nassau, New Providence – the Capital of The Bahamas.  Hundreds have heeded evacuation notices and shelters were reporting full in many parts of that island.
While communication was lost in islands like Acklins; Inagua reported some structural damage, a sunken ship, almost a foot of localized flooding in Matthew Town, telecommunications infrastructural damage and electricity is lost.  Ragged Island, Exuma and its Cays were for hours being slammed by the hurricane and there was no word of the frightening storm surge for those cluster of islands and cays.
As Hurricane Matthew rolled into Nassau; power was lost and sparking and fire on the Bahamas Power and Light electricity poles were reported into the early morning.  A 10 to 15ft storm surge is forecast for little Nassau which is in the direct path of the strong storm.
Unfortunately, New Providence also recorded another murder last night when a gunman reportedly showed up at another man’s door and shot him point blank.  The TCI and The Bahamas have strong family and business linkages, and so the events of our neighbours north are of particular interest.  Also of interest: Haiti, the nation which provides the TCI with its largest expatriate workforce.
Media reports say millions evacuated, thousands of homes were lost, farms are decimated and the death toll varies but gets to 26 by some accounts; and special forces say it could be worse as they begin to get into the communities hardest hit by Matthew.
The Dominican Republic has seen thousands displaced by the hurricane, four are dead.
It is said that 25 were killed in Cuba and historic structures and homes, thought to be so sound were collapsed in dangerous Matthew.
There was minor damage reported for Jamaica, and already that country is galvanizing its resources to go in to help Haiti.
Photo credit: George Harris

Related Topics:another murder in nassaujamaica gearing up to give aid to haitikiller hurricane matthew rips through caribbeantci spared from matthew
Up Next