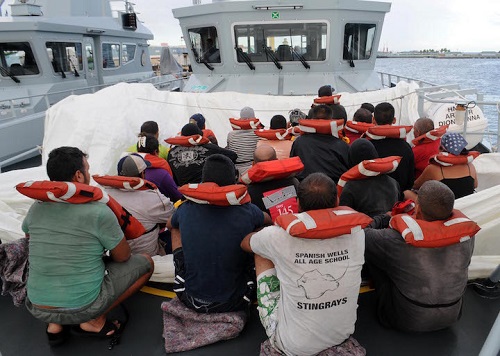 Coral Harbour Base ,(RBDF), Bahamas, October 26, 2016 – A total of 26 Cuban migrants are on the way to the capital after they were apprehended in the central Bahamas by the Royal Bahamas Defence Force on Tuesday evening.

Patrol craft HMBS Rolly Gray, under the command of Acting Lieutenant Commander Granville Adderley, discovered the migrants – 22 males and 4 females—onboard a 32-ft white Cabin Cruiser shortly after 7 p.m. last evening. They were located approximately 20 miles south of Mars Bay, South Andros. The migrants were removed from their vessel and taken onto the Defence Force craft.

They will be turned over to Immigration officials upon their arrival for further processing.  The Royal Bahamas Defence Force remains committed to protecting the territorial borders of The Bahamas.