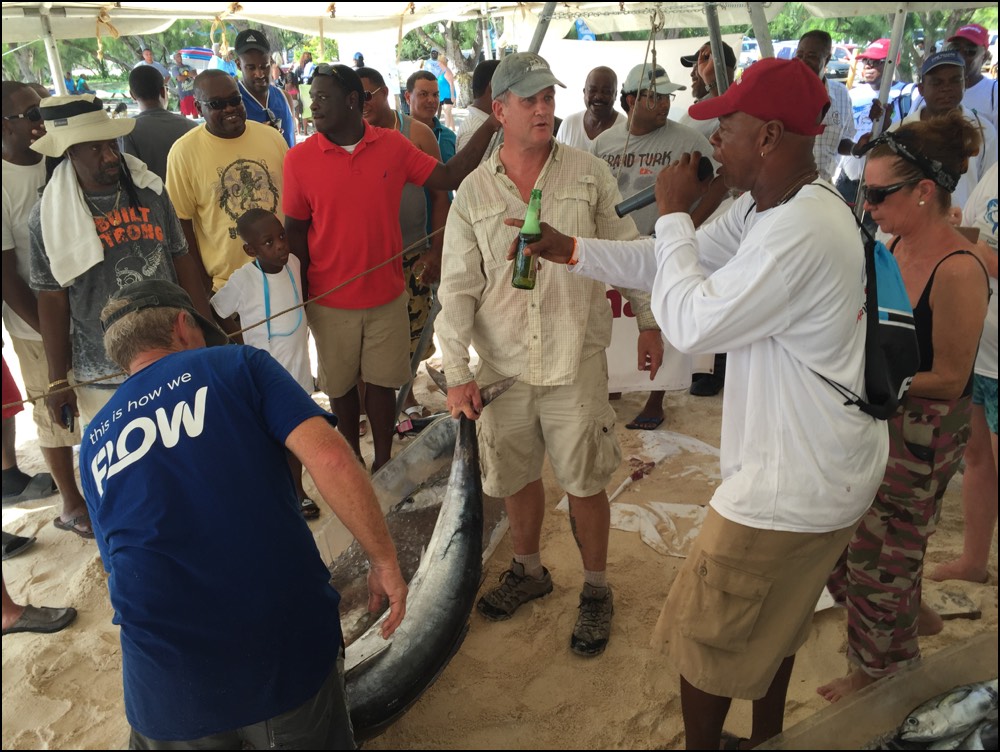 success, with more fish caught than in any previous year. Conditions were

and local knowledge to bring in a record catch. Sunday’s conditions were perfect

and saw even more fish brought to the scales.

hosted by Erika Faller, with the Calcutta bidding and live and silent auctions, also

a lively bar for a great start to the annual fund raiser.

For the second year in a row, Ralph Dietcshe’s “My Boat’ team took top honors

as tournament champions with the heaviest overall catch of 163.4 pounds on day

category wins to take the Calcutta prize too.

take the biggest fish honors and several of the cash categories, including the TCI

For the first time this year there was also a ladies category, and the tournament

committee would like to recognize the very colorful “Fish &amp; Chicks” team for their

breaking down, having accosted a second boat. Also special thanks to The

Marine Police Branch and G &amp; G shipping Co. for assisting with the recovery of

The lively fish auctions were the best we have ever had, with some furious

The victor’s collected their spoils in a prize giving ceremony with H.E. The

Deputy premier and Minister for Education, and Dr Hubert Fulford, Principal of

The GTFT Inc. would like to say a HUGE thank you to ALL our incredibly

generous sponsors, Far too many to mention from all over the TCI and beyond,

especially Grand Turk Liquors who have been with us since day one, and FLOW

as one of our new lead sponsors. We could do not this without the incredible

support across the entire TCI community, which makes this event possible every

year, and of course all our tournament participants from both Grand Turk and

Providenciales; but most of all the incredible community of Grand Turk for their

GTFT Inc. is a registered Not for Profit run solely by volunteers. We use the

causes. In our inaugural year we supported the Geriatric &amp; Special Needs Unit at

the GT Hospital, in year two we sponsored a new computer suite at the H J

School with various legacy projects.  All proceeds for the 2016 tournament will

be going to legacy projects at the TCI Community Colleges.