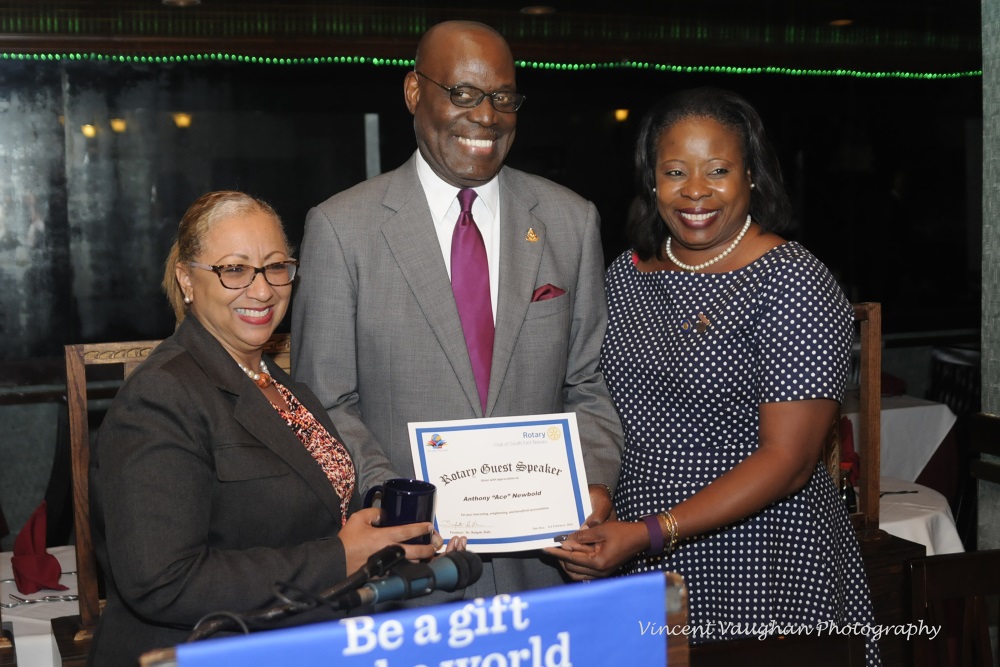 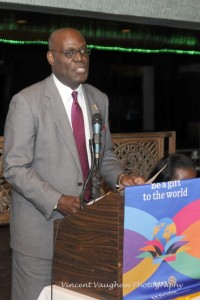 NASSAU, The Bahamas – President of the Bahamas Press Club 2014, Anthony A Newbold addressed the Rotary Club of South East Nassau weekly luncheon meeting on the Role of the Press.

Mr. Newbold stated that the main ideal of The Press Club is to promote the highest standards of journalism and mass communications in the country.

In this vein, The Club is seeking to devise a Code of Ethics to govern the profession, particularly those members of the organization. And, to advocate for the implementation of the Freedom of Information Act.

Dating back to the early 1970’s there have been numerous tries at establishing an association of the press corps in The Bahamas. The most successful of which began in 1996.

“Let me say that the press club is not a union,” said Mr. Newbold, who is Special Projects Coordinator at the Broadcasting Corporation of The Bahamas (ZNS). “The purpose of the club, to borrow from the National Press Club in Washington, D.C, is to encourage friendly intercourse among news practitioners and everyone with whom they have contact, in the pursuit of the profession; to promote the interests of those employed in the media; to ensure public access to information, and of course, to guarantee as much as possible the accuracy of that information, and to cultivate literary tastes.”

Furthermore, “we endeavor to promote and uphold the highest ideals and standards of journalism, while providing for the exchange of ideas and experiences and the offering of professional development opportunities.”

Despite the promising start in 1996, after 2002, The Club remained dormant until August of 2014, when Mr. Newbold led the effort to revive it. Of the 65 invitations, 20 persons signed up, with an additional five signing up since.

“My disappointment, not enough of those signed up are part of the under 30 group of young journalists. We continue to work on them, but you can’t want something for someone more than they want it for themselves.”

He said however, that their involvement is critical, because they make up 90 percent of today’s press corps.

“And, while they may have some formal training, they lack experience and the knowledge and wisdom that comes from that experience, which does not stop them from being tenacious and mercenary in some cases, taking no prisoners in the process.”

While the editors make the final decisions, it helps, tremendously if they have something to work with, he said.

Mr. Newbold noted that media now includes the traditional press corps as well as those involved in social media – usually non journalists and talk show hosts – both unregulated and both bringing a whole new wrinkle to how news is communicated and received.

“All of this demands a discerning and engaged public,” he said.

To Rotarians, he admonished that all have a role to play in what happens with this country and how it happens.

“And, if there is a time for all of us to play our roles, the time is now. It is no longer acceptable, if it ever was, to just be a spectator!

“One of my favourite sayings is, if you are content to just throw rocks from the sidelines and not get in the ring, I have no time for you!”

According to Mr. Newbold, the state of this nation today, demands the involvement of all, as there are too much uncertainty and ambivalence about those foundational institutions that have anchored the society.

In stressing the role of the press, a profession, which he’s practiced for more than two decades, Mr. Newbold, quoted the Venerable Ellen Hume, presently an Annenberg Fellow in Civic Media at the Center for Media, Data and Society, at Central European University in Budapest, Hungary.

There are four essential roles, she says, that a free press serves:
1. Holding government leaders accountable to the people,
2. Publicizing issues that need attention,
3. Educating citizens so they can make informed decisions, and
4. Connecting people with each other in civil society.

Hence, other roles of the press are, being the watchdog of the people, holding government leaders accountable to the people, connecting people through various forms, informing and educating.

Mr. Newbold pledged to continue to push for the cohesive development and training of young journalists and the coming together of all media because not only does he believes there is strength in numbers “but it is one way to ensure that institutional knowledge is not lost.”
One way of enhancing the profession is recognizing the work of meda during the Bahamas Press Club Awards Banquet, held November 21, 2015, which is again set for November 2016.

He also envisions a permanent home for The Press Club, where its members can assembly and enjoy facilities to further enhance the profession.