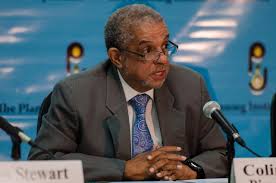 KINGSTON, Aug. 26 (JIS): The Jamaican economy grew by an estimated 0.8 per cent in the April to June 2015 quarter compared with the corresponding quarter of 2014, the Planning Institute of Jamaica (PIOJ) is reporting.

Director General of the PIOJ, Colin Bullock, said this growth in Gross Domestic Product (GDP) was as a result of “the positive impact of continued strengthening of the global economy on some of the major industries, notably Hotels and Restaurants; Transport, Storage and Communication; and Mining and Quarrying.”

He was providing details of the country’s economic performance for the second quarter of the year, at his Oxford Road offices in Kingston on Wednesday (August 26).

Mr. Bullock also attributed the growth to improvement in domestic demand resulting from the strengthening of both business and consumer confidence levels; highway construction (phases one and three of the North-South link of Highway 2000); hotel construction and expansion works; and building of new office space to facilitate expansion of Business Process Outsourcing (BPO) activities.

The growth in Real GDP reflects an increase of 0.7 per cent in both the Goods Producing and Services Industries, over last year.

Within the Goods Producing Industry, increases were recorded for Mining and Quarrying, up 3.6 per cent; Construction, up 1.4 per cent; and Agriculture, up 0.5 per cent constrained largely by drought conditions.
As it relates to agriculture, Mr. Bullock noted that despite the unrelenting drought, the sector showed some expansion in the quarter.

“Drought conditions in the quarter under review held production of ‘other agricultural crops’ below potential but this was mitigated within the sector by the strong performance of traditional export agriculture,” he said.
All Services Industries recorded growth, with the exception of Producers of Government Services, down 0.2 per cent. The manufacturing industry also recorded a
0.5 per cent decline.