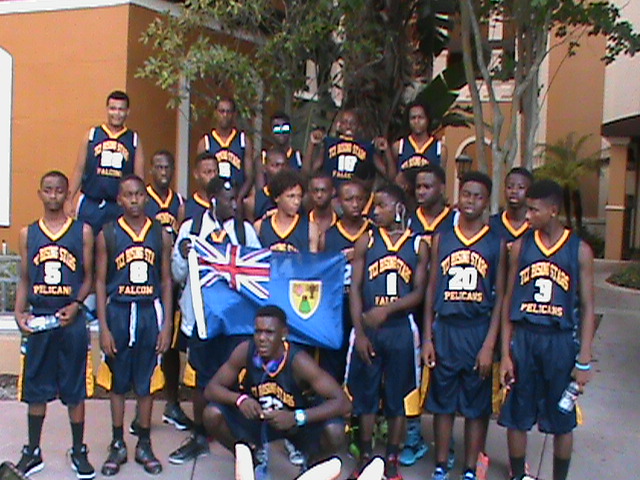 Providenciales, Turks and Caicos Wednesday, July 15, 2015 – The Turks and Caicos Islands Rising Stars Basketball Club (the Club) took two teams to compete in an international tournament during the week of July 5 through July 11, 2015. This exciting tournament marked a first for these young boys as they went off to represent themselves, the Club, their families, and their country on the court.

The two teams were separated by age groups with the younger team being the RSBC Pelicans and the older team being the RSBC Falcons. They competed against teams from the U.S. as well as teams from other countries such as Turkey and New Zealand. The tournament, hosted by the Youth Basketball Organization of America (YBOA), took place in Orlando, Florida, a bustling tourist area known for its many attractions, but the two teams were able to maintain their focus on basketball and stay motivated for the competition.

The tournament itself provided some tough competition for our young athletes as they faced teams that have been playing organized team basketball for years as well as entering into tournaments on a regular basis. Our players gave it their all on the court, playing through tournament nerves, first time jitters, and holding up well to the having the weight of representing a country on their shoulders.

President of the Club and Head Coach of the Pelicans, Mervin Forbes, said the following of his team’s performance, “These boys went out there and gave it everything they had. Some of them developed a new passion for basketball that they didn’t even realize was there and those that had that passion have a new appreciation for it”.
Jonnathan Wynn, Head Coach for the Falcons added by saying, “The effort they put into this tournament is incredible. Our boys don’t have half the advantages of the teams they’re facing but that just goes to show that they have more drive and more determination. I couldn’t be more proud to have been a part of what will one day be remembered as a first step for youth basketball in Turks and Caicos; and I couldn’t be more proud of the young men that rose to the challenge and are hungry to go back”.

The time spent in Orlando wasn’t all tournament focused however. The players were treated to a day at Universal Studios Orlando where they were able to clear their minds of the pressures of competition. They spent their off time between games bonding by either relaxing and playing by the pool or talking strategy for their upcoming games. They even had a chance to speak with the admissions specialist and athletic director of Florida Prep School as they learned that the sport of basketball can be used a key to accomplish their dreams and goals so long as they applied that same level of dedication and commitment to their academic lives.

The trip proved to be a phenomenal experience not just for the players but for the coaches and staff of the Club as well. Commenting on the overall importance of this trip, Dwyane Krzanowski, Assistant Coach of the Falcons and Communications Manager, said, “To see our young men exhibit so much focus and dedication. To watch their love of the sport grow within them and to see them realize that there’s a whole world of possibilities out there for them if they just try; that was the victory we wanted. That was the taste of triumph we needed them to get and we cannot wait to bring them back and hopefully introduce a few more to the experience as well”.

The Club plans to return to the tournament next year provided they are able to raise the necessary funds. FortisTCI is the primary sponsor and the Club has a few other sponsors as well but they are always looking to find more so they can continue to change the lives of the Islands’ youth for the better. If you’re interested in donating, sponsoring the Club, or sponsoring a child that is a part of the tournament team please contact the Club at (649) 243-1866.