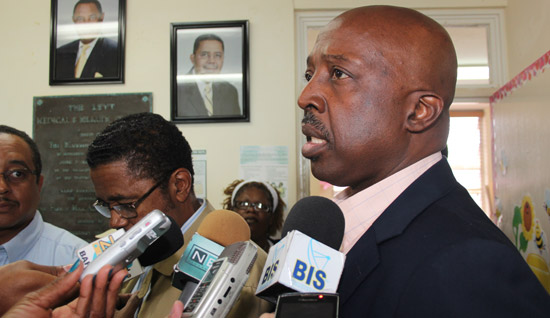 Mr. Speaker, I am so grateful to the good people of the Golden Gates Constituency on whose shoulders I stand on today and whom I have the privilege to serve. Today, Mr. Speaker, I rise to deliver a brief, but very important communication on a decision taken by the Government to cause an increase in the National Minimum Wage.

Mr. Speaker, subsequent to the enactment of the National Tripartite Council Act 2014, on 1st June, 2015, the National Tripartite Council held its inaugural meeting. During this historic meeting, Social Partners representatives, namely the Bahamas Chamber of Commerce & Employers Confederation, the National Congress of Trade Unions Bahamas, the Commonwealth of the Bahamas Trade Union Congress; and the Government, discussed a number of important matters that impacted the working people of our beloved Bahamaland. This meeting, Mr. Speaker, is considered a milestone in the history of industrial relations in The Bahamas, as it marks a turning point in social dialogue and another achievement by this PLP Government.

In the Charter of Governance, Mr. Speaker, we made a covenant with the trade union movement and the working people of our country that this Perry Christie led Administration will take deliberate steps to improve the standard of living and quality of life for Bahamian workers. One of the first things we did was to institutionalize the principles of ILO Convention 144 concerning Tripartite Consultations to Promote the Implementation of International Labour Standards. I wish to remind this Honourable House that it was on 2nd March, 2015, that the Governor General, Her Excellency, Dame Marguerite Pindling, signed into law the National Tripartite Council Act, 2014 and laid another pillar in our plan towards a stronger and safer Bahamas.

Today Mr. Speaker, I am very pleased to publically announce and formally communicate to Parliament that the Government of The Bahamas, acting on a recommendation from the National Tripartite Council, has taken a decision to increase the National Minimum Wage.

To this end, Mr. Speaker, and pursuant to Section 4(3) of the Minimum Wage Act, Chapter 321C of the Statute Laws of The Bahamas, I, acting in my capacity as the Minister with responsibility for Labour, signed the Minimum Wages Order to increase the minimum wage to Two Hundred and Ten dollars ($210.00) per week or Forty-two dollars ($42.00) per day or Five dollars and twenty-five cents ($5.25) per hour. This increase will become effective on 15th August, 2015, once both Houses of Parliament have affirmed a Resolution that I intend to formally move in due course.

The National Minimum Wage, Mr. Speaker, was statutorily enacted on 21st January, 2002, and effectively mandated that no person employed in the Commonwealth of The Bahamas should be paid less than One Hundred and Fifty dollars ($150.00) or Thirty dollars ($30.00) per day, or Four ($4.00) per hour.

The new minimum wage, Mr. Speaker, is a 40% increase, and while we in the government would have liked to have seen it a bit higher, we have accepted the recommendation of the National Tripartite Council and acted accordingly.

I am advised that the recommended increase came about after extensive consultation with national, regional, and international experts in the area of industrial relations. Additionally Mr. Speaker, the Social Partners, I am told, deliberated, agonized and analysed data acquired both locally and internationally, as well as it examined comparative legislation from a number of CARICOM member states, before coming to a compromise on a final figure for the new national minimum wage. It is envisioned that the Council will monitor the cost of living and the retail price index, and it is prepared to recommend additional increases to ensure that weekly wage of Bahamian workers is able to keep pace with any increase in these index.

Our research has confirmed that despite the false rumours that an increase in the minimum wage will lead to higher levels of unemployment, this notion should be rejected. In fact, Mr. Speaker, in the Caribbean, Latin America, and the United States, the increase in minimum wage has had a positive effect on the growth of the economy, as persons would very quickly utilize any wage increase by purchasing goods and services thus increasing economic activity.

I wish to caution those unscrupulous employers that would try and undermine this increase and deliberately and intentionally withhold the additional wage from hard working Bahamians, that the Inspectorate Unit of the Department of Labour have been instructed to implement a comprehensive inspection plan to ensure that there is compliance, and it will aggressively pursue violators and prosecute them to the full extent of the law.

Mr. Speaker, it is with much pride and on behalf of the working people of the Bahamas that I move the following resolution:

AND WHEREAS the Minister has consulted with a The Bahamas Chamber of Commerce & Employers Confederation, a confederation representative of employers and associations of employers generally, and both the National Congress of Trade Unions Bahamas and the Commonwealth of the Bahamas Trade Union Congress, associations of registered trade unions which are representative of employees generally;

AND WHEREAS pursuant to section 4(3) of the Act, as soon as the Minister has made a minimum wages order it shall be subject to affirmative resolution of both Houses of Parliament;