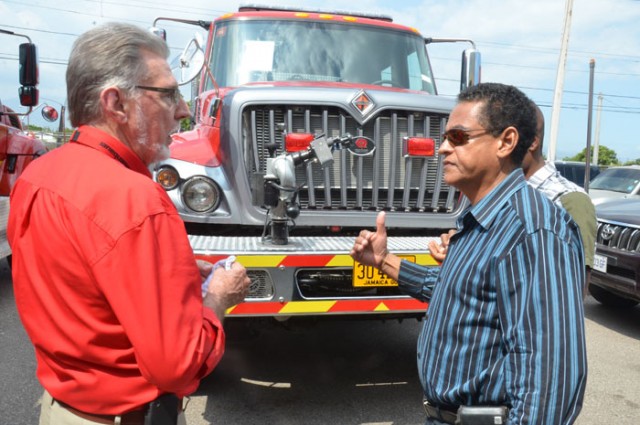 KINGSTON, July 6 (JIS): Work will get underway this financial year on the construction of three new fire stations, as Government puts measures in place to improve the efficiency and effectiveness of the Jamaica Fire Brigade (JFB).
To be built under the Disaster Vulnerability Reduction Project, funded by the World Bank, the fire stations will be located in Yallahs, St. Thomas; Port Maria, St. Mary; and Montego Bay, St. James.

“All the design work for these stations has been completed and submitted to the World Bank,” said Minister of State in the Ministry of Local Government and Community Development, Hon. Colin Fagan.

He was speaking at a press briefing today (July 6), at the Ministry’s Hagley Park Road offices, Kingston.

Mr. Fagan also informed that a major renovation project will take place at the Spanish Town Fire Station, with a significant portion of the labour and workmanship to be provided by the fire fighters.

In addition, the JFB will be repairing 280 hydrants and installing 75 new ones across all parishes at a cost of $15.9 million.

“There will also be routine maintenance work on approximately 1,200 hydrants islandwide. These projects will be funded from resources provided in this year’s budget,” he indicated.

Also, some 200 fire fighters will be recruited and trained this fiscal year.