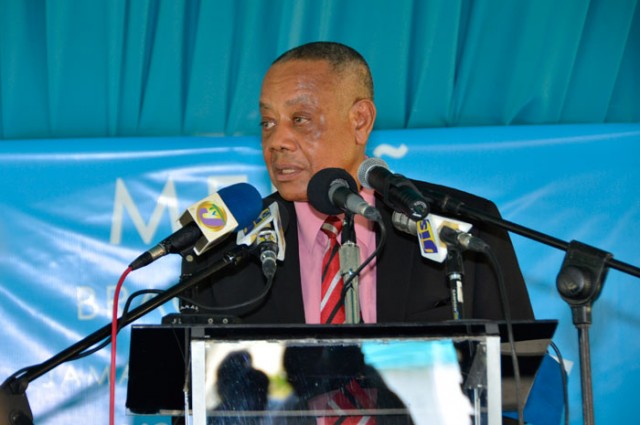 MONTEGO BAY, April 26 (JIS): Minister of Agriculture, Labour and Social Security, Hon. Derrick Kellier, has reiterated the Government’s stance on the issuing of work permits to foreigners to work in Jamaica.

Addressing a ground breaking event for the launch of the Melia Braco Village in Trelawny on April 24, Minister Kellier said the Government will be unrelenting in its efforts to ensure that work permits are issued based on the guidelines governing the system.

He said in issuing work permits, priority will be given to protecting the employment of Jamaican workers and will only be issued foreigners in cases where they are absolutely necessary.

“The Ministry administers a rigorous work permit regime…(and)… when gaps arise in the availability of local skills for foreign investment initiatives, if we are not to frustrate the progress of these projects, then such skill gaps will have to be filled by workers from elsewhere,” Minister Kellier said.

He noted further that the Government recognizes that the best way to ensure Jamaican workers are given priority treatment during the recruitment of workers is to create the necessary platforms for high level training for those persons.

He added that his Ministry is in dialogue with a number of training agencies, with a view of ensuring that Jamaican workers receive the highest level training which will equip them for employment.

“We are also working closely with HEART/NTA and Jamaica Promotions Corporation (JAMPRO) to identify the skills that are needed and to train our workforce… (and make them) ready for employment in investment projects,” Mr. Kellier said.

Meanwhile, on the matter of the Ministry of Labour and Social Security’s Workers Passport initiative, Mr. Kellier is encouraging the management of the Melia Braco Village to work with the Ministry in using the construction site as a pilot for that project.

Minister Kellier, in admitting that the legislation to implement the workers passport is yet to be passed in Parliament, said the Melia Braco Village site would be a good place to start.
“These passports will be the first step in guaranteeing that workers are competent and equipped to operate safely on work sites in both international and local markets. And while I know that this initiative is still in the early stages of development and the legislation is pending….our team will be working assiduously with Melia to explore the possibility in incorporating the workers passport as a pilot on this Braco site by the contractors,” he stated.
Under a 15 year lease management agreement with the Government through the National Insurance Fund (NIF),Melia Resorts, a Spanish-based company, will be operating the former Braco Village Resort in Trelawny.
The resort will become known as the Melia Braco Village, with 250 new rooms being added to the existing 225. The property is scheduled for opening in December 2015.