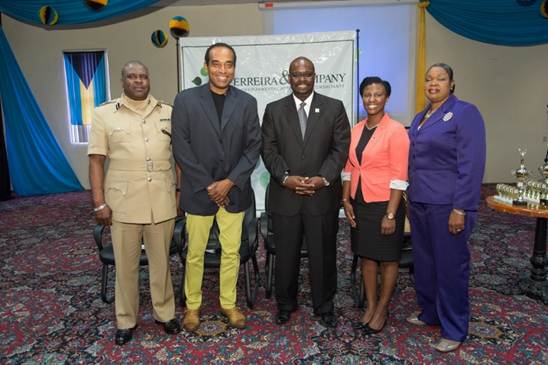 Bahamas, 27 April 2015 – In the midst of public uproar surrounding the government’s negligence to inform the public of the results of a 2012 underground leak at a local gas station, the Minister of Environment and Housing urged high school students to help the Government to correct its flaws.

Minister Kenred Dorsett made the call at the opening ceremonies for the third Earth Day Challenge sponsored by Ferreira & Company held earlier this week, which attracted more than 50 students from around the country. The event encouraged students to display environmental issues and provide solutions for them, something Dorsett said was quite a heartening experience for him.

“I was encouraged about the future of earth sciences in our country when I learnt that not only were you required to complete science projects, but you have to defend them and also find out if there were any laws that encouraged the activities of your project,” said Dorsett. “So now you can point out weaknesses to the Government and help us to make laws to support the environmental projects you studied.

Just last week, Dorsett and his government agency came under fire after it was revealed that an independent study completed by Black and Veach International (BVI) in 2014 indicated that an oil leak at the Rubis Service Station on Robinson Road exposed residents of the area and employees of surrounding businesses to harmful chemicals.
The report went on to say that while remediation efforts were appropriate for groundwater contamination, Rubis could have also acted on its off-site impacts. One of those harmful chemicals included Benzene, known to be a cancer-causing component. The initial complaint was made in 2012 and the results of the year-old report, were not released until last week after residents demanded answers.

Since last week’s revelation, Bahamians have strengthened their cry for a Freedom of Information Act to be passed, something environmental consultant and attorney Romauld Ferreira says he has been pushing for more than two years.
“The time to act is now,” said Ferreira, who is also a director of the environmental group Save The Bays. “Had there been a Freedom of Information Act in place, the people would not have been left in the dark for nearly two years. Now we have persons who have been exposed to deadly toxins, something that could have been avoided had there been a law for accountability and transparency in the first place.”
Shortly after making the call to the students, Dorsett admitted that the process of the release of the report should have been more transparent, but maintained that there was no conspiracy to conceal information from the Bahamian people. Dorsett has called the government’s handling of the Rubis matter “a teachable moment.”