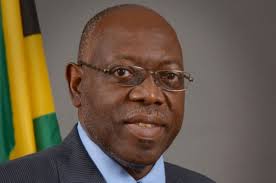 MONTEGO BAY, Oct. 29 (JIS): Health Minister, Hon. Dr. Fenton Ferguson, said that only the major hospitals such as Cornwall Regional and Kingston Public will undertake the treatment of any suspected Ebola cases in Jamaica.

He said isolation facilities at the other health facilities will only be used for “holding purposes”.

“The whole idea is that the other hospitals…all of them should have an isolation area…that isolation area will be a holding area…not a treatment area because we have to be very clear about treatment versus holding area. In each region, you will have a dedicated ambulance…so it’s not going to be any ambulance that is going to move a suspected case,” Dr. Ferguson said.

He was addressing members of the media today (October 29), following a tour of temporary Ebola isolation facilities at the Cornwall Regional Hospital in Montego Bay.
The Health Minister informed that discussions are underway with the Jamaica Fire Brigade and the army for the movement of suspected Ebola victims.
He said also that “we would want to, where possible, have holding areas established at the ports of calls because I think best practice will demand such action.”

Work on the temporary isolation unit and triage unit at Cornwall Regional are being undertaken at an estimated $30 million and should be completed by mid-November.