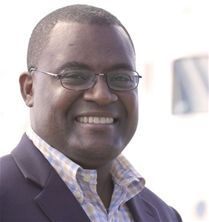 Air Turks and Caicos is rebranding and now renamed… now called InterCaribbean Airlines, the company last night unveiled its new look and announced to staff that they will be take on the starring role at the company.

Owner of the airline, Lynden Gardiner on hand and saying this move has been years in the making and an investment of tens of millions of dollars… explaining that it is also historic for the TCI with InterCaribbean scheduled to begin direct flights into US territory, Puerto Rico… scheduled to fly direct between the Dominican Republic and Puerto Rico and set to run domestically in Jamaica between Kingston and Montego Bay.

Unveiled at the Air Turks and Caicos hanger in Providenciales, the company’s new CEO Trevor Sadler said there is a big roll out in Puerto Rico this week; adding that flight costs will drop for all current routes and promising that domestic service will not be hurt by the addition of these runs.

Already the new look is taking over the aircraft fleet, and a new plane is being added and on its way from the US. The company will showcase those in the coming weeks.

Direct flights to Puerto Rico from the TCI begins in January.