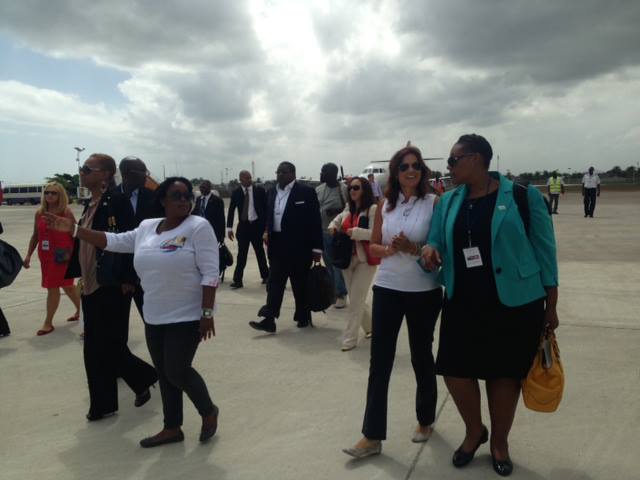 August 16, 2013 — PROVIDENCIALES, TCI – “Trade Mission TCI-Haiti” organised by the Haitian Consulate in conjunction with the Providenciales and Grand Turk Chambers of Commerce, took from the 9th – 13th August 2013.

Supported by the Turks and Caicos Islands Government Investment Unit, the main objectives of this mission were: a) to highlight Haiti assets as an international trade hub; b) to identify commercial and business opportunities ideally suited for the TCI private sector participants; c) to engage in dialogue with Government officials on ways to develop and enhance trade between TCI and Haiti; and d) to explore avenues for trade agreements and further strengthen bilateral cooperation between the two countries.

The delegation departed Providenciales for Haiti on Friday, August 9th arriving in Cap-Haitian where they were welcomed at the airport by the Minister of Tourism, Mrs Stephanie B. Villedrouin, who accompanied the delegates on tours of the Citadel Laferrière in Milot and the Museum of Money in Cap-Haitian. Mrs Villedrouin in expressing her happiness about the visit stated that she is looking forward to “leading a reverse trade mission to the Turks &amp; Caicos Islands to discuss further a partnership between the two countries on tourism related initiatives.”

On Friday afternoon the delegates were treated to lunch by the members of the Chambers of Commerce of the Northern region of Haiti and the Tourism Association, and that evening they attended the “Celebration of the Festival of the Sea” hosted the Minister of Tourism.

Saturday morning saw the delegation touring the Industrial Park of the North, where they witnessed among other thing paint being manufactured. Next, the team visited a number of farms, including a multipurpose farm that grows Sisal, Egg Plant, Thyme, and other plant products; while raising bees – for use in the production of honey and wax – and livestock.

The delegates flew to Port-au-Prince late Saturday afternoon where they stayed at the newly completed Best Western Premier in Pétion-Ville. On Sunday morning the delegation visited the Museum of Haitian National Pantheon and the Boutiliers Observatory. Monday morning saw the delegates attending a Press Conference and a presentation on “Doing Business in Haiti” by Andy Rene, General Director of Center For Facilitation of Investment (CFI), whereby in the afternoon the delegates attended a lunch meeting with the Minister of Finance and Commerce, Wilson Laleau. That evening business meetings were arranged for the delegates by the Haitian Chamber of Commerce (CCIH), who matched the delegates with Haitian business of suitable commercial interests. The trip ended on Tuesday with the delegates attending a lunch meeting with the Ministry of Agriculture. After a packed 5 days the delegation arrived back in the Turks &amp; Caicos at 7 p.m. on Tuesday evening. The members of the included:

The delegates flew on Sunrise Airways, a new start-up airline based in Port-au-Prince. Sunrise a co-sponsor of the Trade Mission has just entered the final stages of securing the necessary approvals to begin scheduled flights between Haiti and the Turks and Caicos Islands.

HALF A MILLION TO BE SPENT ON GRAND BAHAMA SCHOOLS

NEMA’s tips and advisories on floods and tornadoes