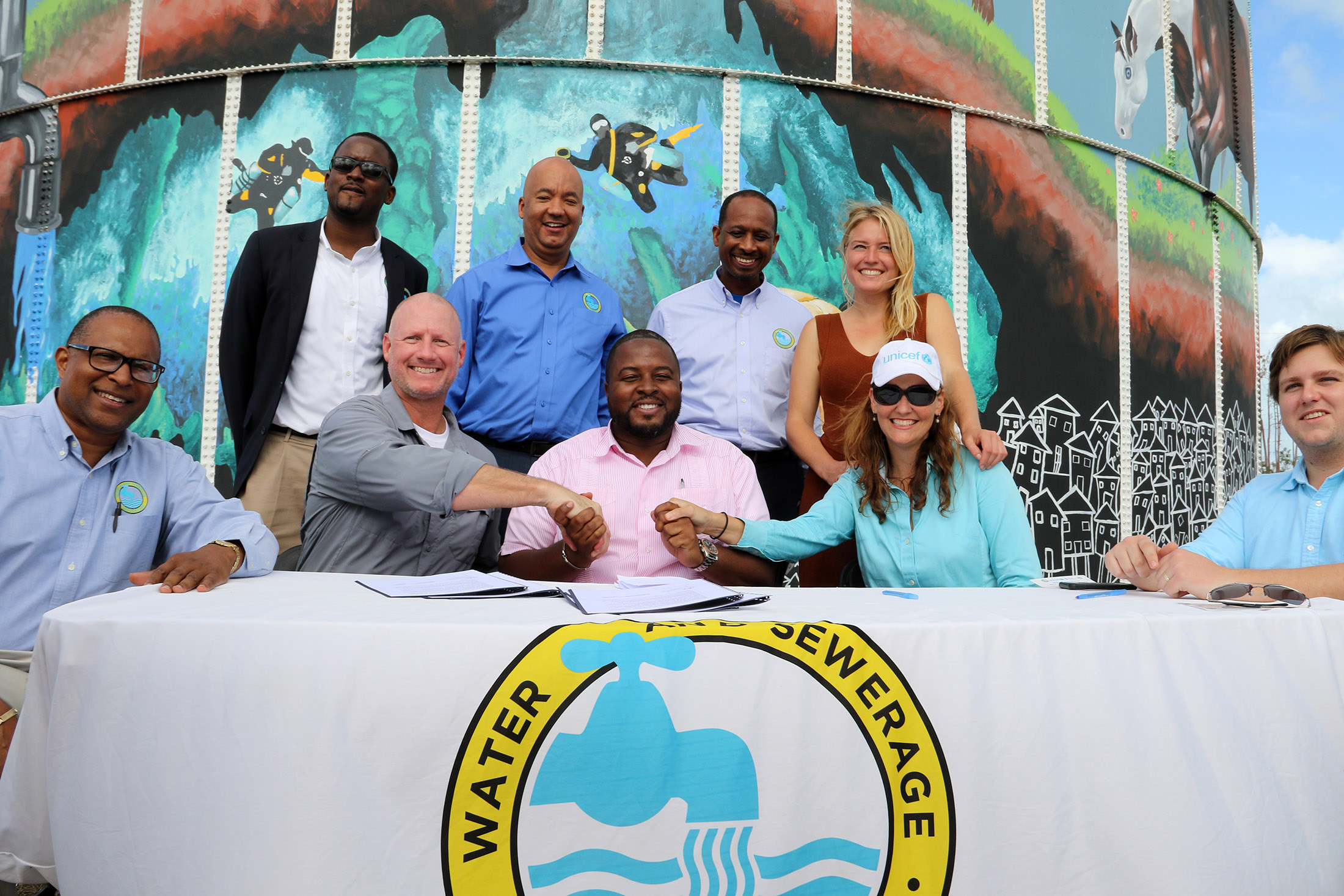 Abaco, December 16, 2019 – The Bahamas – In a ceremony dubbed a ‘celebration of hope’ the community of Abaco witnessed the signing of an agreement for Abaco Sunny Waters, a $1.2 million initiative between the Water and Sewerage Corporation (WSC), The Goodness Tour, Water Mission, and The United Nations Children’s Fund (UNICEF), for a solarization project to transform 11 water systems in Abaco, the mainland and the cays that have suffered damage as a result of Hurricane Dorian.

“I am pleased to be here today to participate in the signing of the agreement between the corporation, Water Mission and UNICEF that will result in the supply and installation of a state-of-the-art solar facility that will power both of our well fields in Marsh Harbour plus our new Marsh Harbour pumping station,” said Adrian Gibson, Water and Sewerage Corporation executive chairman, and MP for Long Island.

Mr. Gibson said WSC has successfully restored an interim supply of water for all communities in Abaco and noted the occurrence of periods of low pressure and or no water due to the fragility of the power generation, water production and destruction to the distribution systems.

The chairman addressed the launch Thursday, December 12, 2019 in Marsh Harbour. In attendance was James Albury, Parliamentary Secretary and MP for Central and South Abaco, representatives of NEMA, WSC and NGOs, community leaders and school children.

“I have been extremely impressed with the heart and soul of people of Abaco and Bahamian population as we have come together to demonstrate our resiliency and resolve in the face of utter devastation. Yes, we’ve been knocked down but we’ve definitely have not been knocked out. We’re getting up and we’re building stronger and better than before,” he added.

The Chairman thanked the NGOs for their support and outlined measures that WSC has undertaken since the passage of Dorian. They include the following:

– The award of a contract for a new 1.5 million imperial gallon storage tank to replace 2 existing storage tanks that have been extensively damaged;

-The award of a contract for new distribution pumps;

-Processing of contract drawings for a new Pumping Station.

Mr. Gibson said, “In total, contracts in excess of $6 million have been issued for rebuilding works in Abaco.

“The focus in all of our rebuilding efforts is to design and construct climate resilient systems and facilities that can withstand future major storms.”

James Albury, Parliamentary Secretary in the Office of the Prime Minister, MP for Central and South Abaco, said  the signing is the result of hard work and collaboration.

“Pessimism and criticism will not rebuild our communities, our homes or a better world for ourselves and future generations. What we’re doing here today is what makes a better future for ourselves and all those who come after us. It’s a representation of hope, of what we can actually accomplish by working together.”

“This project will not only work to improve the hardware per se of the island but, through the proposed water, sanitation and hygiene (WASH) school program, have a lasting impact on the next generation of Abaco,” said Mrs. Pinder.

“Through partnerships with the Ministry of Education and Friends of the Environment greater opportunities will be created for children to experience science up close and personal and hope to inspire the next generation of Bahamian hydrologists, environmental scientists, water resource experts and professionals with a deep understanding of sustainability and resilience.

“It is therefore so inspiring that the WSC has taken this lead role in ensuring that The Bahamas will be an example for other countries in both reducing our carbon footprint through the solarization of the Abaco well fields, and being such an advocate for the involvement of Bahamian children. We are truly lifting up our heads to the rising sun and the world will mark the manner of our bearing,” added Mrs. Pinder.

Header: The Water and Sewerage Corporation led by Executive Chairman, Adrian Gibson (seated 3rd from left) and representatives of NGOs sign a contract for the transformation of water systems in Abaco.  James Albury, Parliamentary Secretary in the Office of the Prime Minister, is pictured seated at far right.

James Albury, MP for Central and South Abaco and Parliamentary Secretary in the Office of the Prime Minister, gives welcome remarks.