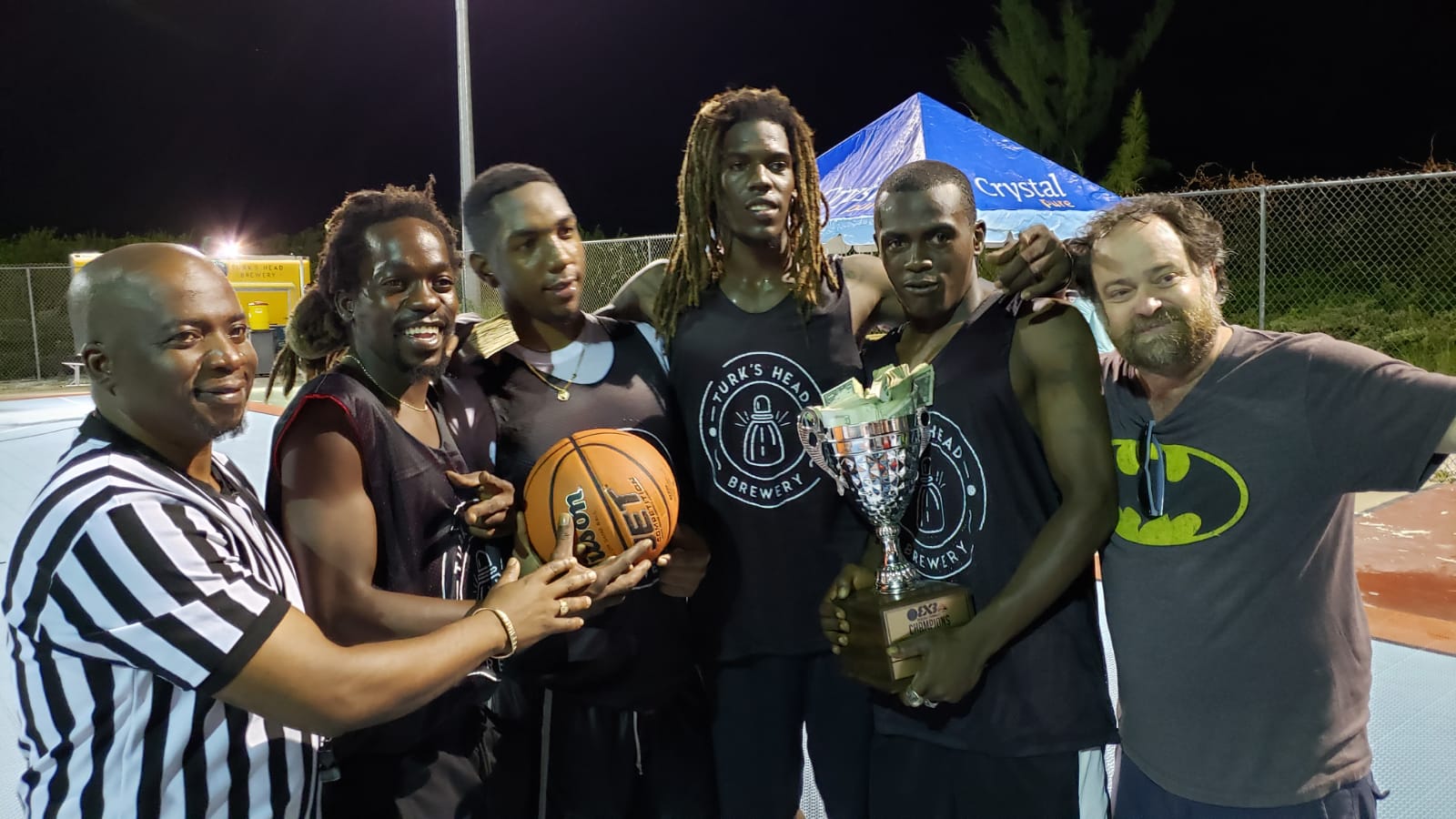 #Providenciales, 28 November, 2019 – Turks and Caicos – The heat was on Saturday, at the Turks Head Brewery and Turks and Caicos Island Basketball Federation 3on3 Basketball Tournament. Basketball players from around the island gathered at The Bight court for a two-day tournament. The court was ablazed with excitement as 10 teams competed for the championship title, cash prize, and tournament rings.

Teams played a round robin, giving them a chance to compete against each team. The top 6 teams were selected to compete in the finals. The 6 top scoring teams were: The Dominicans, The Knights, the HAB Sonics, The Bight, the South Caicos Young Guns, and City Kickers.

It was a showdown of skill and sportsmanship as the lower seeded teams- City Kickers, South Caicos Young Guns, HAB Sonics, and The Bight competed for two spots in the semi-finals. HAB Sonics advanced to the next round thanks to the team effort of Jahmeel Damon, Alvardo Parker and Darado Fulford. The Bight team also advanced onward with a succession of 3pt line shots from point guard Zack Rigby and the quick footwork and defensive rebounds of Kadeen Davis, Dekash Capron, and Lathario Parker.

The match up for the semi-finals featured a heated game between the HAB Sonics and top seeded team The Knights. The Knights made formidable opponents with talented shooters Kadis Simmons, Clifton Jean, Dondre Taylor, and Melvin Elsie raining buckets on their competition. Tension was high as the game came down to the last 14 seconds of the game with a tie score. The Knights went on to beat the HAB Sonics in a blazing overtime game.

At the other end of the court The Bight fought a tight battle but couldn’t hold down 6’6’’ centre Charlton Stubbs of the Dominicans. Team mates Jakie Been, Hoovan Cabral, and Hendy Diaz rotated a tight strategy of defence and offense, keeping The Bight players on their toes. The semi-final game between the two ended with the Dominicans advancing to compete against the Knights.

The court was alight with anticipation of the final game. The crowd fervour increased as they stood to their feet roaring with excitement after each play between the Dominicans and the Knights. This was the most action pack 10 min game of the series. The intense competition went into overtime. Rules of the 3 on 3 tournament states the first team to make 2 points in an overtime game wins. Both teams increased the pressure however, the Knights drew two fouls, giving them the edge they needed to win the game and take home the championship.

The tournament also featured a 3pt shoot out. A member from each team showed their skills on the 3pt line. The Knights Clifton Jean took home the winning $500 cash and bragging rights. Numerous players remarked on their appreciation for the tournament. Jakie Been said, “I’m glad I joined this tournament. We need events like this more often. I can’t wait for the next one.” The organizers for the event, TCIBF Vice President Curtis Ford said, “the goal of the federation is to influence the lives of these young men through basketball. If we provide ways for them to exert their energy in a positive way, it will impact their future and the state of our community.” The TCIBF is expected to have an active 2020 season as they restart the popular Provo Basketball League tournament. President of the TCIBF, Sydwell Glasgow says, “the 3 on 3 tournament is just a start. We will have more activities in 2020 including another edition of this tournament for the under 18 years old players. We want to take this to each island, from there create a national team that can play in international games.”

Manager for Turks Head Brewery, Dave Bozzer says, “As a corporate sponsor, these are the type of activities we like to get involved in. There is so much skills and talents in the country and we want to create opportunities for them to be displayed.”

3 on 3 basketball is the largest urban sport in the United States. It became more standardised in the late 1980s through numerous tournaments. In the 1990’s the game developed international recognition through several tournaments including the Adidas streetball competition. Currently, the games format is structured and governed by the International Basketball Federation (also known as FIBA). 3 on 3 basketball will take a spotlight at the next summer Olympics, where it will be premier for the first time at the international sporting event.

For additional information about the event contact: Chandra Craigg or Lee Ingham- Outside the Box Advertising 432-0103/432-5966 outsidetheboxtci@gmail.com

Release: Outside the Box Advertising