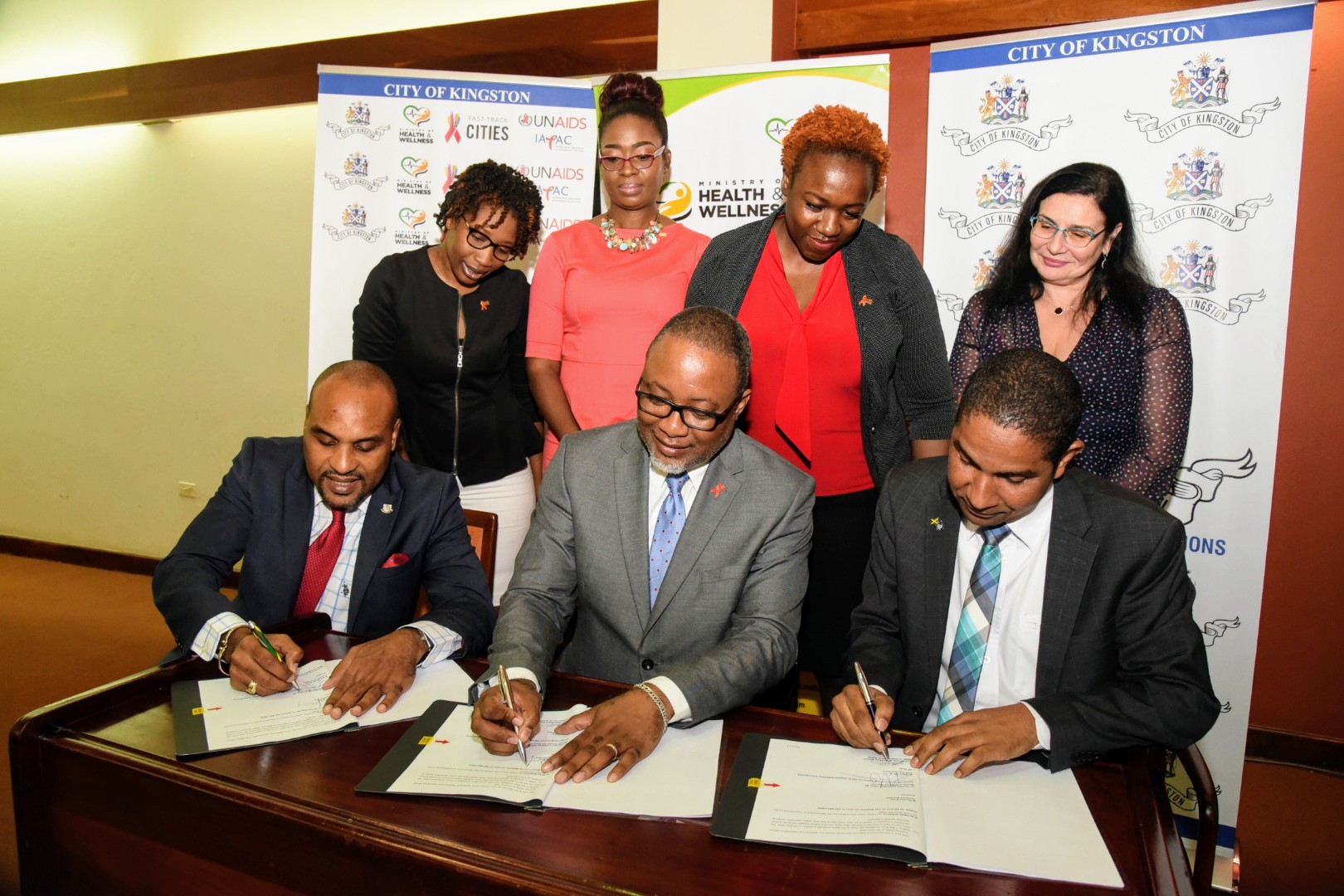 #Kingston, November 26, 2019 – Jamaica – The Government has signed a Memorandum of Understanding (MOU) with the Joint United Nations Programme on Human Immunodeficiency Viruses (HIV)/Acquired Immunodeficiency Syndrome (AIDS) – (UNAIDS) – which will activate the Fast-Track Cities programme in Kingston.

The Fast-Track Cities initiative is a global partnership between cities and municipalities around the world with four core partners – the International Association of Providers of AIDS Care (IAPAC), UNAIDS, the United Nations Human Settlements Programme (UN-Habitat) and the city of Paris.

Representatives from the Kingston and St. Andrew Municipal Corporation (KSAMC) and the Ministry of Health and Wellness signed the MOU on Monday (November 25) at the Jamaica Conference Centre in downtown Kingston.

The initiative is also geared towards achieving zero stigma against persons living with HIV/AIDS.

Mayor of Kingston, His Worship, Senator Councillor, Delroy Williams, said this initiative will help to bring more “understanding” among Jamaicans about the need to fight against diseases such as HIV and help with planning for prevention.

Coordinator, Disaster Preparedness/Project Liaison, KSAMC, Terry Forrester, gave an overview of the targets for the parish of Kingston regarding the initiative.

“Through the development of a project steering committee, a work plan has been approved for Fast-Track Kingston Plus, which includes the development of a city health profile for Kingston which will be displayed on all websites, including the Kingston and St. Andrew Municipal Corporation’s website, and the Ministry of Health’s website,” Ms. Forrester said.

“This will provide a comprehensive health profile for the city, which will not be limited to HIV,” she added.  She said environmental sanitation will also be included in the programme, given the various challenges that exist with dengue and other vector-borne illnesses that are heavily driven by the state of the environment.

Among other objectives, the initiative seeks to: provide an overview of the Fast-Track Cities Programme in Kingston; pledge support for the implementation of the Fast-Track Cities Programme; highlight the work being done on the fight against HIV in Kingston; establishment of a framework to address the social determinants of health, including those affecting HIV; and signing of an MOU between the KSAMC and the Ministry of Health and Wellness.

Fast-Track Kingston has also taken a holistic approach for health services in the Shelter Health Programme which has been tailored for the homeless population in Kingston and St Andrew.