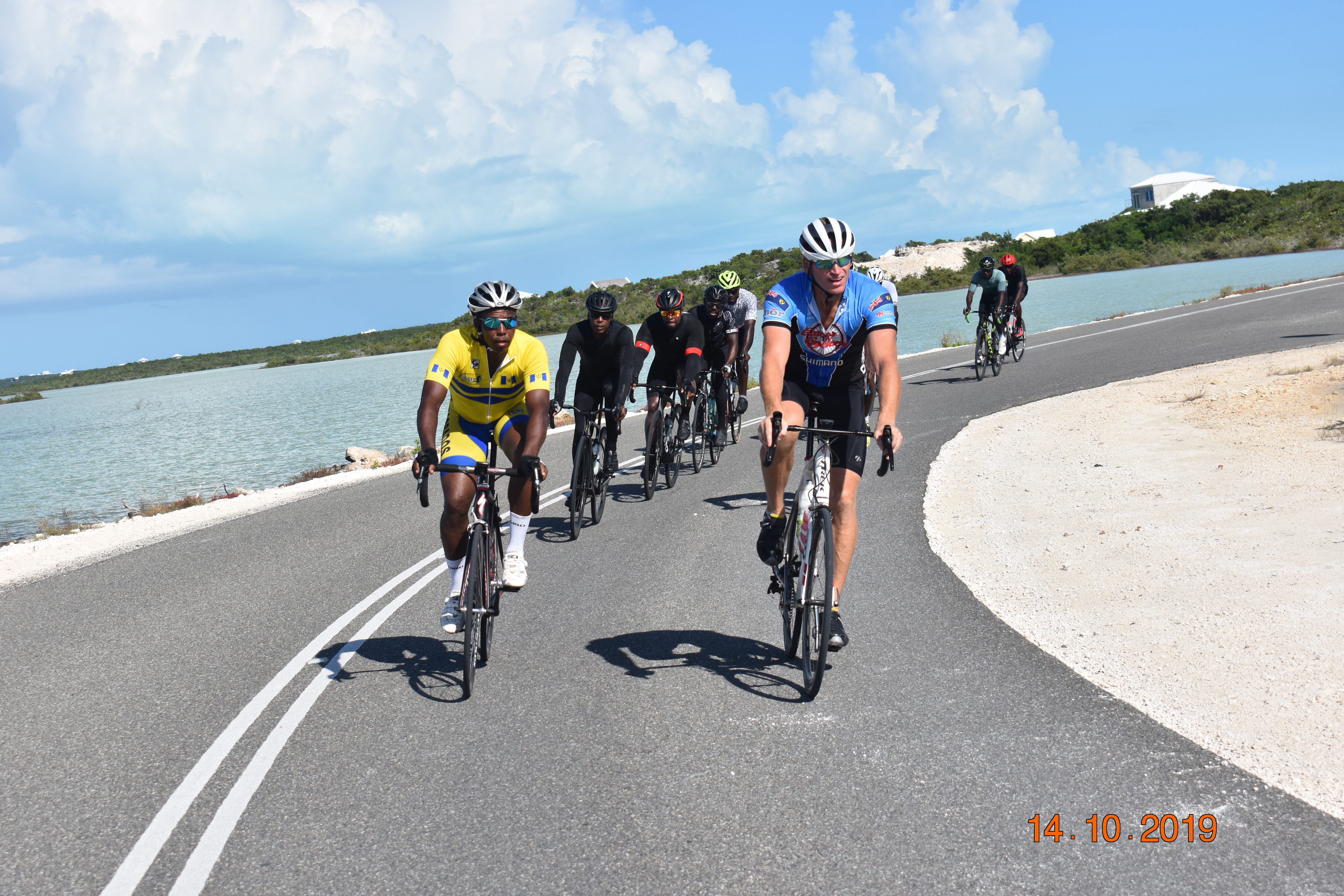 Stage one took place in the Nation’s Capital, with a 36-mile road race for Masters and Elite, 25-mile for Females and 6-mile for Cadets. Early in the race Devaughn Williams and visiting rider Sedwin Jones fom Barbados went down in a nasty fall. Thankfully they sustained no major injuries and was able to compete in later stages. The main race saw attacks by Elite rider Omard Gardiner, which he held for more than 20 miles. A well coordinated chase group was able to reel him in with just 4 miles to go. The race ended in a photo finish sprint between Friedise Registre and Omard Gardiner, where Omard edged the sprint king by just inches. Friedise Registre, Shanwell Gardiner and Daniel Redmond, took the top spots for Masters. Omard Gardiner, Tyrone Bishop and Earldarrel Basden placed first, second and third in the Elite Category. Gabriella Hedegus was again the lone female rider. Ethan Gardiner, Kymani Ewing and Tauraine James were first second and third in the Cadets race.

After a 2-hour rest period, stage three, a road race between North and Middle Caicos began. Masters and Elite 54 miles, Female 46 miles. The race got started at its usual fast pace and saw characteristic attacks by Tyrone Bishop, Sean Rogers and Sedwin Jones. However, no one was able to get away and the entire pack stayed together for the entire race which eventually came to a bunch sprint. Elite winners were Tyrone Bishop, Omard Gardiner and Sean Rodgers. Masters winners Daniel Redmond, Friedise Registre and Sedwin Jones.

The fifth and final stage was a road race throughout Providenciales (65 miles Elite and Masters, 46 miles Female). From the beginning of the race there were attacks from Sedwin Jones followed by Omard and Dan Redmond. The highlight of the race was a solo breakaway by Sean Rogers. This solo breakaway was executed at a high enough pace to see Rogers ride off to a solo victory. Race favourite Fred Registre suffered a flat mid-race and was unable to finish. Elite winners of the race were Sean Rodgers, Tyrone Bishop and Omard Gardiner. Masters winners were Sedwin Jones followed by, Kavin Ewing and Shanwell Gardiner.

At the end of all five stages the overall winner of the Masters category was Dan Redmond followed by Sedwin Jones and third was Fred Registre. Elite Category winners were Tyrone Bishop, followed by Omard Gardiner and third was Chevorn Bishop.

Visiting rider, Sedwin Jones expressed excitement about his participation in the Tour of TCI and stated he was quite surprised by the level of talent and competition here in the TCI. Mr Jones who is a former multiple National champion of Barbados has confirmed he will definitely be back to compete next year. President of the TCI cycling Federation was very satisfied with the turnout and performance of the cyclist. TCI has set a new standard in the region with this being the only 5 stage race being held over a 3 day period. The level of difficulty is unlike no other race on record and TCI has caught the attention of many cycling Federations around the region. The Bahamas, Anguilla and Canada has already indicated that they will be competing in the Tour of TCI for 2020.

The Tour marks the end of the season for the TCI Cycling Federation. After tallying all points accumulated during the 2019 season, the overall winner for the Masters Category is Frediese Registre, followed by Shanwell Gardiner and third place Dan Redmond

Next on the agenda for the TCCF is the 19th Annual Caribbean Championships to be held in Havana Cuba 1st to the 3rd of November. This is the first invitation TCI has ever received from the Caribbean Cycling Confederation (CCC). We will be taking a team of 4 to the games.