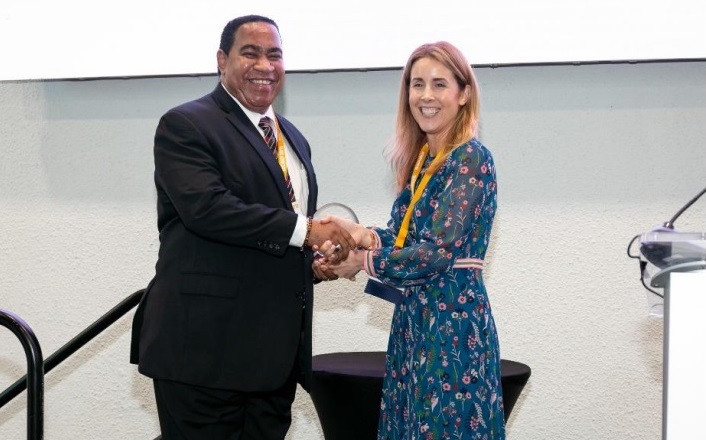 #Providenciales, October 28, 2019 – Turks and Caicos Islands – FortisTCI President and CEO Eddinton Powell was recently named the 2019 recipient of the 3rd Annual Caribbean Renewable Energy Forum (CREF) Energy Leadership MVP Award. The honor is given to a nominee who has made a significant contribution to energy development in the region. CREF Program Director Julie Taylor, on behalf of the CREF Advisory Committee, announced the award on Thursday, October 17, at the 11th annual CREF Conference in Miami, Florida, USA.

With almost 40 years of industry experience and 12 years as President and CEO of FortisTCI, Mr. Powell is credited with leading the transformation of the electricity sector in the Turk and Caicos Islands (TCI). His accomplishments include investing in the professional development of employees to create a well-trained and diverse workforce, leading to the company achieving ‘Investors in People’ accreditation in 2016. In 2018, FortisTCI was again accredited with Investors in People (Silver) certification.

Under his leadership, FortisTCI earned its first investor grade credit rating with Standard & Poor’s, providing the company the opportunity to access affordable financing in the United States capital debt market. Other FortisTCI achievements under Mr. Powell’s leadership include, earning ISO 22301:2012 certification for business continuity management from three leading global standards organizations, and ISO 14001:2015 and ISO 45001:2018 certification for Occupational Health and Safety, and Environmental Management Systems. Mr. Powell also created an environment where modernizing utility infrastructure for resiliency and reliability was a priority. This approach led to a utility with one of the highest reliability stats in the region, adding to the continued economic development of the TCI.

In 2018, the company won the Edison Electric Institute (EEI) restoration award for its recordbreaking restoration of service in the aftermath of Hurricanes Irma and Maria. FortisTCI restored service to the entire country in 60 days, which had a positive impact on the country’s economy.

Mr. Powell has led FortisTCI to integrate and enable the renewable energy transition through the establishment of distributed generation solar programs for customers, which received the 2018 CREF award for Best Distributed Generation Project. He and his team have also worked alongside the Turks and Caicos Island Government and the Rocky Mountain Institute to finalize a national energy plan called the Resilient National Energy Transition Strategy, which will serve as the country’s blueprint over the next 22 years.

In May of this year, Mr. Powell was elected as Chairman of the CARILEC Board, having already served as CARILEC Vice Chairman, Chairman of the Audit and Risk Committee, and a member of the Executive Committee between the 2016 – 2019 terms. In his current role as Chairman of the Board, Mr. Powell has advocated regionally for the transition to cleaner energy sources and encouraged a focus on sustainability and resiliency. Prior to 2007, Mr. Powell served 25 years with Caribbean Utilities Company Ltd (CUC) in the Cayman Islands, four years of which he was Senior Vice President and Chief Financial Officer.

Speaking of the award, Mr. Powell said, “This came as a complete surprise. I am humbled to accept this award, but I do so in honor of the fantastic women and men at FortisTCI and the great support from our Parent Company, Fortis Inc. This Award means a great deal to me and the company, and the people that I represent and work with. CREF is doing a great job in promoting renewable energy in the Caribbean. The annual CREF Conference has help to facilitate the rapid scale-up of renewable energy in the region.”

CREF is the largest annual industry conference for the Caribbean region focused on advancing the clean energy market for a clean energy future. As CREF Organizers, New Energy Events established the awards program to recognize Caribbean leaders making a difference through resiliency and renewable energy and creating project development for countries to transition to more sustainable clean sources of energy.