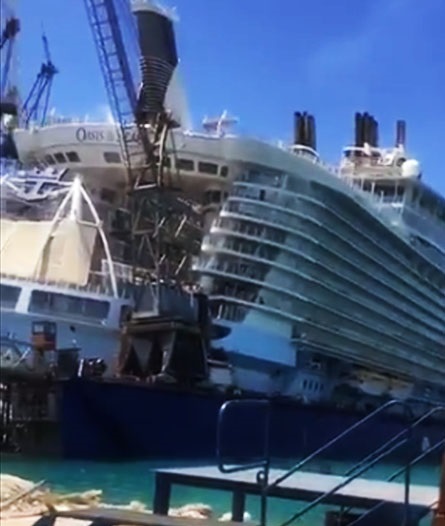 #Freeport, GB, April 2, 2019 – Bahamas – An investigation will likely expose that the cruise ship was too heavy for the Grand Bahama Shipyard’s cranes, causing one of the world’s largest passenger vessels to come crashing down at the Freeport based dry-dock facility.

The accident earlier today resulted in several workers being injured; though not severely after the cranes trying to hoist the Oasis of the Seas from the ocean buckled under the weight of the enormous Royal Caribbean Line cruise ship.

Specifics on the boat say it weighs 100,000 metric tonnes; which means the vessel is far heavier than the Grand Bahama Shipyard’s advertised capability to cater to boats up to 82,500 tons.

At the company’s website, www.GrandBahamaShipyard.com it is said vessels up to 300m can be accommodated at the facility; however, the Oasis of the Seas is considerably longer with its recorded length at nearly 1,250 metres.

The Grand Bahamas Shipyard’s website was last updated in 2018; we tried to verify if the data posted there.

Magnetic Media today contacted Grand Bahama Shipyard for comment on the disaster which is attracting growing media attention; however, the PR executive was said to not be available for comments.  It was recommended that we call back as a statement today was unlikely.

It was also said Grand Bahama Shipyard was at the time meeting with Government officials.

Royal Caribbean has commented that they are working with authorities to assess damages to the ship; adding that they are aware of the damage to the dock structure and multiple construction cranes.

The accident happened today around 1:45 pm according to Royal Caribbean.  Dock workers were accounted for and injuries were described as non-life threatening.