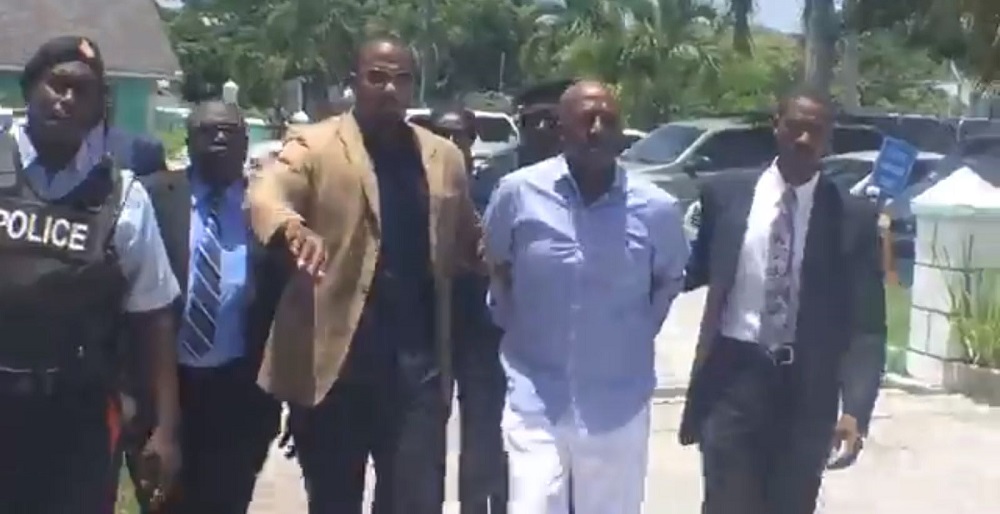 Bahamas, August 4, 2017 – Nassau – A staggering 36 counts of crime were hurled at the former PLP Labour Minister Shane Gibson, who today limped his way into the Magistrate’s Court amidst shouts of support from PLP supporters and other former ministers who lined the walk of shame into the court house.    Gibson was arrested yesterday after turning himself in at the CDU.

By minutes to 2pm today, dressed in what many would call, island chic and with hands cuffed at his back, deep frown on his face but occasional warm facial greetings to those reaching out to him.    Gibson hopped up the small flight of stairs to hear that his alleged corrupt connection to Jonathan Ash is what sparked the bevy of charges, the most charges of any of the PLPs arrested to date.

One of Gibson’s attorneys, Wayne Munroe QC objected to his client being held overnight, even told media that the Police would have had to come and pick him up, that he would not have voluntarily reported to them.    Munroe had said that the charges would not be linked to NIB, though many throughout the day Thursday were promoting that notion.    Munroe clarified that the charges would likely have been linked to Gibson’s time as the Hurricane Czar following the passage of last October’s Hurricane Matthew.

During his budget contribution in late June, Prime Minister Dr. Hubert Minnis confirmed what political activist, Omar Archer had been reporting on social media.    PM Minnis had said, that the transactions linked to Ash Construction would be given to the Auditor General for investigation after records showed 46 payments of over $8M were paid to Jonathan Ash, to clean up after Hurricane Matthew.   The figure was put at exactly, $8,113,908.24 from the public purse to Ash Trucking, Heavy Line Services, Earth Movers Incorporated Industrial and Heavy Equipment Company; some of these companies were unregistered but all are owned by Jonathan Ash.

Later this month, former Environment Minister, Kenred Dorsett and former Senator Frank Smith are due to reappear in court in connection to their alleged misdeeds while holding public office.