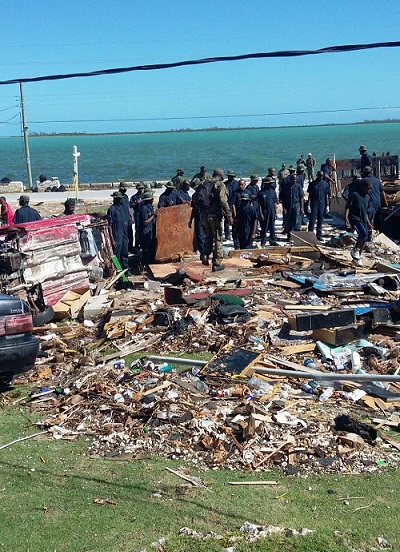 Nassau, Bahamas, October 23, 2016 – Residents in North Andros who were severely impacted by the powerful Hurricane Matthew almost two weeks ago are beginning to feel some sense of normalcy, as a massive clean-up campaign is almost completed in that Family Island community.  On Sunday, October 23, two weeks after the Category 4 storm struck that area, Leonard Dames Jr. assistant administrator of North Andros gave an update of the recovery progress and how residents are coping.

“There is a sense of hope in their eyes as the relief supplies arrive and are given out to the residents. There are smiles on faces, friendly laughter amongst the people s they play cards and dominoes.”  Mr. Dames said that the communities rallied together to help clean up their environment. Women used cutlasses to clear fallen trees from pathways.  The Men used their pick-up trucks to cart away loads of debris to the waste and landfill site. 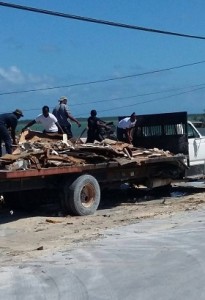 The residents are grateful that marines of the Royal Bahamas Defence Force were able to provide meals from its city container – cooking up to 720 meals a day including breakfast and dinner. Additionally, some 2,4000 gallons of drinking water is being distributed to residents.  Bahamas Red Cross personnel on the ground were Deputy Director Diane Turnquest accompanied by Exanne Dormeus, Philip Johnson, Thomas Robinson, Harold McPhee and five volunteers.  The team traveled to distribute 120 -50 pound packaged boxes to those mostly impacted by the Category 4 storm when it struck on Thursday, October 6.

A team of 50 Royal Bahamas Defence Force marines participated in a clean-up exercise in the Central Andros community.  A drone for an aerial video of the damages was used to determine which areas needed cleaning.  Mr. Dames noted that the communities of the North Andros District were traumatized as a result of Hurricane Matthew. But a “ray of hope” beamed over the residents with the arrival of a Bahamasair chartered flight on Saturday 8th October, 2016.

Onboard were the Rt Hon Perry Christie, Prime Minister, the Leader of the Opposition Dr Hubert Minnis, the Hon Shane Gibson, Minister Responsible for Hurricane Recovery and Restoration, Director of NEMA Captain Stephen Russell and other officials who conducted early assessments to find out immediate needs.  This was the beginning of the “Hurricane Relief to the people of North Andros”, Mr. Dames said.  Latest statistics show that North Andros has a population of about 3,998 residents. 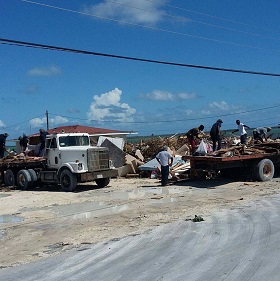 The initial assessment revealed that 238 persons – 134 adults and 104 children – were displaced.  A total of 59 families who needed housing – 55 already placed and accommodations are being sought for the remaining 4.  Initially, 31 homes were affected – 25 in Lowe Sound, 5 in Mastic Point and 1 in Conch Sound.  However daily assessments are ongoing.  In the immediate aftermath of the storm, relief supplies of fruit, vegetables, water and hygiene kits were distributed to residents by Defence Force marines and social workers.

Structural assessments were carried out by a team from the Caribbean Disaster Emergency Management Agency, CDEMA of which The Bahamas is one of the 18-member Participating States.  At the request of NEMA, the group formed three teams and was deployed in Andros, Grand Bahama and New Providence.  The team comprised experts in disaster and emergency management, physical planning, engineering, geospatial data analysis, healthcare, public health and environment.  CDEMA is expected to submit an official report of its findings to NEMA, shortly. 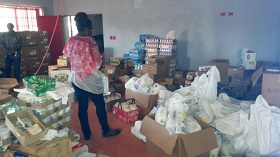 Heads of the Methodist Church and the Methodist Habitat lead a team into the area with a view to rendering assistance in the relief, recovery and reconstruction phases.  The police station was used as the command centre depot where gallons of bleach, hygienic kits, and pots/dishes, and cooking utensils were distributed to the residents in the communities.  In the Lowe Sound area, work crews continued with the clearing of the streets consisting the RBDF advance team and workers from Emile Knowles Construction with the use of a pay loader and two dump trucks.

Volunteers prepared meals and drinks for those in need along with The Lord’s hand ministry, Alma Pratt, a resident of Conch Sound and the Mennonites who distributed fruits, vegetables and water.  The Defense Force roll on roll off vessel is also scheduled to set up a site at Morgan’s Bluff to distribute water and food to the residents.