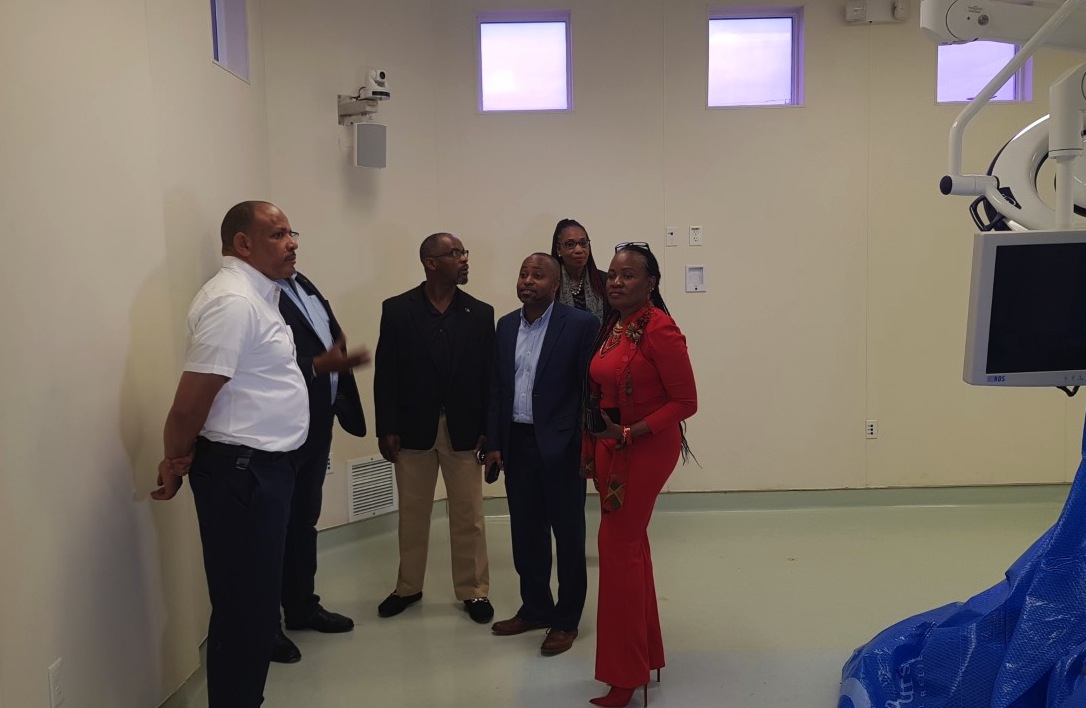 The tour gave the Health Minister a first-hand view of the renovation work presently being carried out at the Rand Memorial Hospital, which was hard-hit by Hurricane Dorian in September of this year. Severe flooding forced all of the wards in the hospital to be emptied.  Those patients were eventually housed in fully-equipped makeshift tents by Samaritan’s Purse.

Minister Sands said “I want to assure the public that we will not do anything that will in anyway compromise the safety of our people,” said Dr. Sands. “So there will be mold remediation to ensure that any bacteria contamination is sorted out, that the structure is safe; and it will be restored.

“In the area of the Operating Room, the Recovery Room, the Central Sterile Surgical Supply area, there is not a whole lot of work left to be done, but it is a part of the entire remediation project.”

Minister Sands noted that Samaritan’s Purse has agreed to stay on until March 2020. “So, we would like to have a number of the services return to the Rand Memorial Hospital at that time.  Realistically, we have to be out of those temporary facilities when hurricane season starts again.

A temporary operating and recovery room will be constructed in the area where the ambulances presently enter with emergency patients. The Health Minister is hoping that by as early as January, the Rand will be able to re-start elective surgeries.

He noted that the cost of the renovation of the Rand has been estimated to be around $20 million.  “As we look at the value of this remediation and renovation work, it’s in the millions of dollars. The Ministry of Health has agreed to have all of the donations for health audited, and we will present that audited report once it is completed.”

The Minister noted that “very soon” some of the services that are currently being carried out by Samaritan’s Purse will be moved and replanted into a renovated Rand Memorial Hospital.  “But in the meantime, let us not underestimate the value of the contributions by them and all of the organizations that have come forward in our time of need.”

Minister Sands noted that renovation work on the IAT building that was carried out since Hurricane Dorian has recently been completed, and it is expected that the Administrative teams, which have been in tents provided by Samaritan’s Purse, will move into the renovated building as early as this week.  Out-patients clinics will be resumed from the same building.

Asked about the possibility of constructing a new hospital, Minister Sands said that is something the entire government supports. He pointed out that the Prime Minister has already made it clear that a new hospital is in the works for Grand Bahama.

“A new hospital has to be planned, it has to be conceptualized and we need to identify an appropriate site,” added Minister Sands.  Grand Bahamians deserve all of the services that can be provided in The Bahamas, that means cardiac care, cancer care and services that are not currently provided, so we have to conceptualize what that facility would look like. We also need to know what kind of design would need to be used.

“We have to make sure that as we plan for the era of climate change, that when we invest in the structure of Grand Bahama, that it is one that will serve the people of Grand Bahama, not just for this year, but for the next generation; so it has to be thought out, carefully planned and I don’t imagine that such a facility we would have the ground breaking for [in] less than two years.”

Minister Sands says that the renovation work on the Rand Memorial has made tremendous headway and tremendous progress.  All of it, he said, has been possible by the grace of Almighty God and with the help of so many committed and dedicated people to the project.

Insert: Minister of Health, the Hon. Dr. Duane Sands points out some of the damage to beams in the male ward of the Rand Memorial Hospital to Minister of State for Disaster Preparedness, Management and Reconstruction, the Hon. Iram Lewis, during a recent tour of the hospital, which was severely damaged by Hurricane Dorian in September of this year.  Renovation work on the hospital continues to progress.