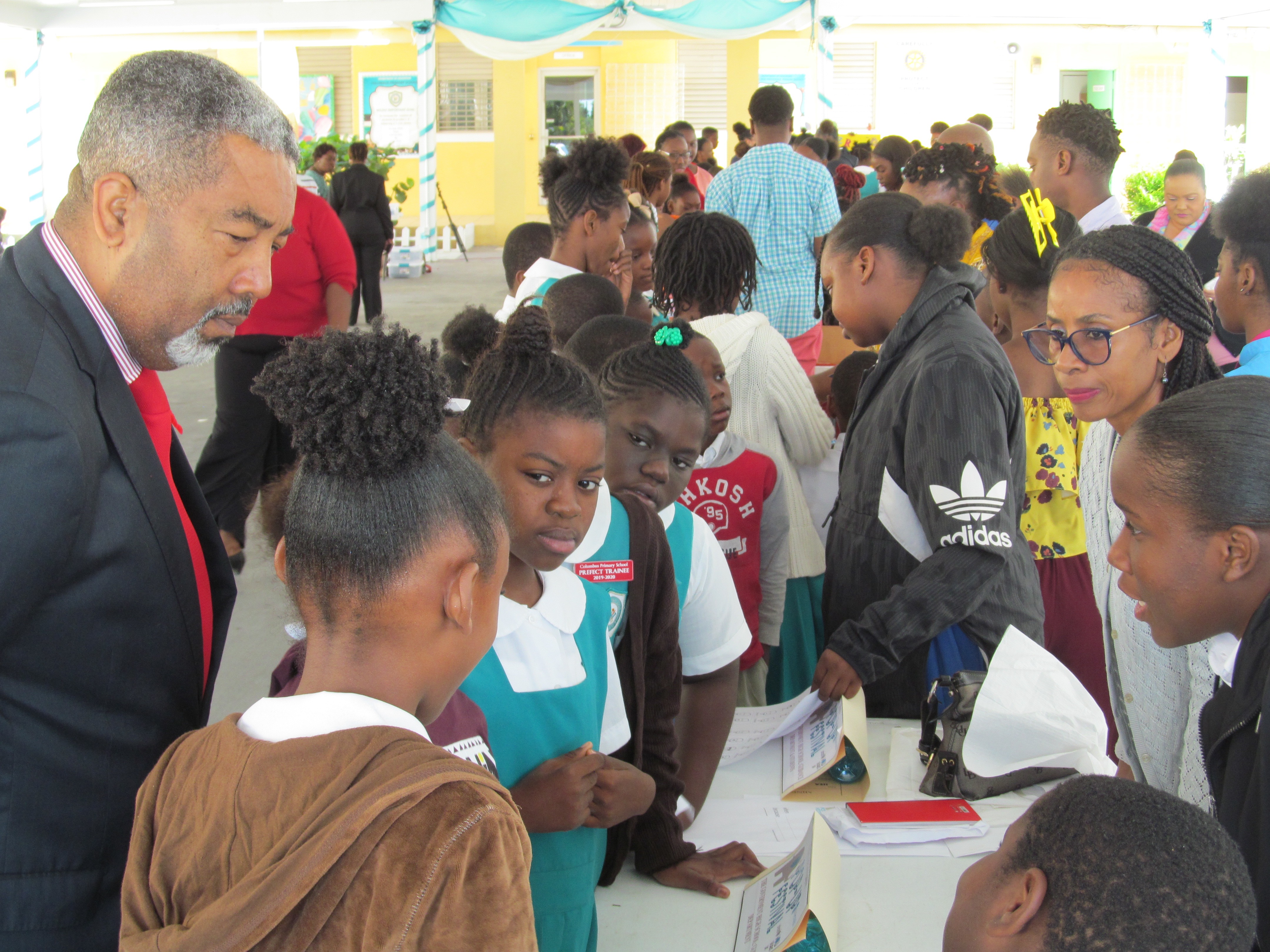 #Nassau, November 22, 2019 – Bahamas – Representatives from across the government sector combined forces Tuesday (November 19) to host a POP-UP Festival at the Columbus Primary School in the lead-up to celebrations of World (Universal) Children’s Day.

World (Universal) Children’s Day was celebrated around the globe on Wednesday, November 20, 2019. This year marks the 30th anniversary of the United Nations Convention on the Rights of the Child.

Fifth-grade students from Columbus Primary School were joined by a combined 40 students from the Government High School and Bahamas Baptist Community College at the festival which was facilitated by representatives from the National Child Protection Council (NCPC), the Ministry of Education’s School Psychological Services Unit, The Bahamas National Drug Council, Ministry of Health; the Royal Bahamas Police Force – Crime Prevention and Drug Enforcement Units, and the Guidance Counselling Department, Government High School.

Organizers used fun, educational activities to educate the students about managing emotions and the Rights contained within the Convention on the Rights of the Child.

Minister of Social Services and Urban Development, the Hon. Frankie A. Campbell, told Members of the House of Assembly (Wednesday, November 20) that the introduction of the POP-UP Festival was one of several new and innovative ways child protection officials have been utilizing to take the message to children across The Commonwealth of The Bahamas.

Additionally, Minister Campbell said, The Bahamas’ Trafficking in Persons (TIPS) Task Force has been raising awareness about the dangers of child trafficking since January, 2019, at all levels in the public and private school systems, using storytelling, role-playing and videos where applicable, to sensitize children about harmful situations associated with child trafficking, while providing tools that they can use to get help.

“For example, a video called ‘little red’ is likened to the story of Little Red Riding Hood and is a favourite with the children. ‘Little Red’ can be any vulnerable, lonely, at-risk, neglected or abused child who is helped to identify the ‘wolf in sheep’s clothing.’”

“These children are now more aware of this threat to their safety and can now become advocates for other vulnerable children.”

(Minister Campbell announced that he would lead a delegation of officials to Eleuthera (Thursday, November 21): “to bring the celebration of World Children’s Day to one of our Family Islands and share the message of the value of our children’s contributions to their communities and their rights as citizens.”)

“Over the past 30 years, many countries around the world, including The Bahamas, have made great strides in bettering the lives of children, and protecting their rights. Our children in return, have shown us their strength and leadership with many advocating for a more sustainable world for all. We have more ground to cover and so I encourage mothers, fathers, teachers, community leaders, churches, nurses and doctors, government leaders and children themselves to share this message of the value of our children through dialogue and actions,” Minister Campbell added.

Insert: Minister of Social Services and Urban Development, the Hon. Frankie A. Campbell, with students from Bahamas Baptist Community College during the Minister’s attendance at the POP-UP Festival held Tuesday (November 19, 2019) at the Columbus Primary School. Minister Campbell is using Sign Language to say “I Love You” to the community of persons who are deaf and/or hard of hearing.