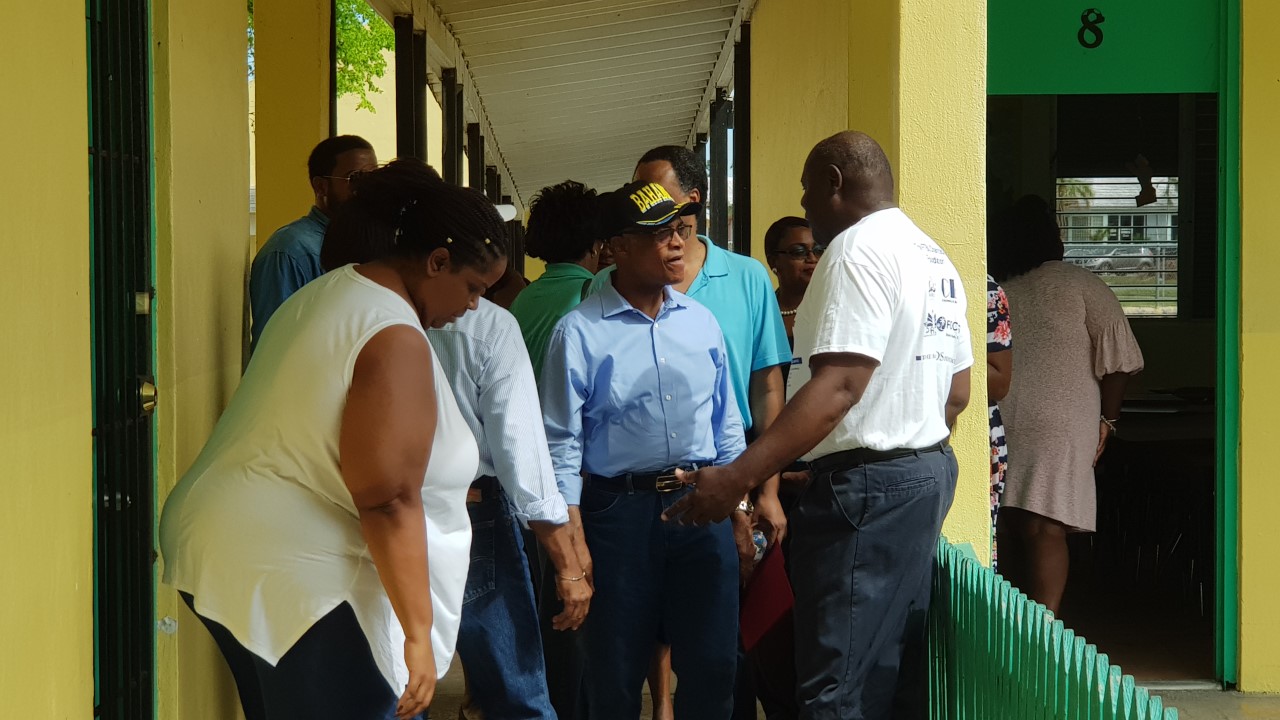 #Freeport, September 23, 2019 – Bahamas – Minister of Education, the Hon. Jeffrey Lloyd flew into Grand Bahama on Thursday, September 19, 2019 to inspect the condition of public schools, most of which were devastated by Hurricane Dorian.

Initially, government schools were set to re-open on Monday, September 23, 2019, but that can change once all of the assessments have been made.

“We would like to get school started as soon as possible, but we’re very concerned about the safety of our children,” said Minister Lloyd. “We want to ensure that the water system is stable and that electricity is available for the teachers and the students. We also have to ensure that our teachers, administrators and support staff are in the frame of mind to educate our children.

“This has been devastation for everyone involved. Some people have lost everything and they have been debilitated as a result.”

The Minister said that he has had the opportunity to speak with Mrs. Lewis, the Principal at East End Primary school, who confirmed that she has a number of students from her school missing, as well as parents and grandparents still not accounted for.

He added that the students from East End will have to be accommodated in the Freeport area or in Nassau, if necessary.

“But we are here to not just assess the situation, but to be sensitive and to offer our support,” said Minister Lloyd.

The Minister acknowledged that from his tour, the Hugh Campbell Primary school was (at that point) the worse he had seen. The school was flooded with at least nine feet of water, with windows and doors blown out.  Upon the Minister’s visit, workers were still busy cleaning out classrooms, dumping school desks, chairs, and books; pulling up soaked and mildewed carpets and tearing out wet sheet rock and throwing them into piles within the school yard.

“That school is in very, very bad shape,” noted Minister Lloyd. “It is much worse than we had anticipated. So, that is going to cause our budget to have to be adjusted. But some of the schools appear as if they can be opened once proper cleanup has taken place.”

At Jack Hayward High School, Minister Lloyd was given a short tour of some of the damage at the senior school. Although the teachers and staff members had cleaned up much of the debris that had been caused by the storm, evidence of some damage was visible at the entrance of the building, where flooding had taken place.

Minister Lloyd said that once he and his team of Education officials have assessed all of the government schools on the island, a meeting will be held and a decision will be made as to when schools will be opened. He admitted that because of the level of destruction at some of the schools, there is a possibility that those schools would take much longer to reopen.

The Education Minister said that there are some possible locations that have been identified that could be used temporarily for students and teachers until some schools have been repaired.

“Mr. Ivan Butler our District Superintendent is giving us a heads-up on that aspect of things,” said Minister Lloyd. “In the event that we find that the repairs will take longer than we anticipate, he’s looking into places we can use in the interim.

“We may have to do some creative things to get the kids back into school and going again. We all know that from a psychological standpoint that as quickly as we can get kids back to some sense of normalcy, it would help with sense of getting back the lifestyle they’ve become accustomed to.”

Asked how smoothly the process of assimilating students from Abaco into Nassau will run, Minister Lloyd noted that getting the children into Nassau was not a problem. However, trying to register children into various schools proved to be a challenge, although he added, the Ministry has tackled that problem effectively.

“We’ve already registered over 1,200 students and over 250 teachers and administrators; and this weekend we are going to start placing them in respective schools. As a matter of fact, some students have already begun to be placed in respective public schools.

“I do know that we had initially invited the private schools to offer spaces if any was available and many of them did. So, we have students already in the private schools. We’re making progress, but we have to do it right, that’s why it’s taking a little longer.

“We want to make sure that everyone is immunized properly, that they are properly identified and that they have the amenities that they need. And then we have to identify which schools have the space to [accommodate] them.”

All things considered, Minister Lloyd said that he’s looking forward to the schools getting to the point where things are considered normal again. In the meantime, the Minister said while they would like to move quickly to get schools up and running again, they want to do so with a level of sensitivity.

DISCUSSING DAMAGE – Minister of Education, Jeffrey Lloyd (with cap on) speaks Thursday with some of the teachers and maintenance workers at Freeport Primary School about the damage caused to the school as a result of Hurricane Dorian.

WHAT ABOUT WATER ISSUES? – Minister of Education the Hon. Jeffrey Lloyd visited Grand Bahama public schools, September 19, 2019 to assess damage to those structures during Hurricane Dorian.  Joining, Minister Lloyd on the tour of GB schools was District Superintendent for Grand Bahama, Ivan Butler, along with Education officials. During his visit to Jack Hayward High School, Minister Lloyd got to speak with Geron Turnquest (left), General Manager of Grand Bahama Utilities, concerning water issues.

HOW DID THAT HAPPEN? – During his assessment tour of Jack Hayward School, Minister of Education, Jeffrey Lloyd sees injured hand of one of the security officers at the school.