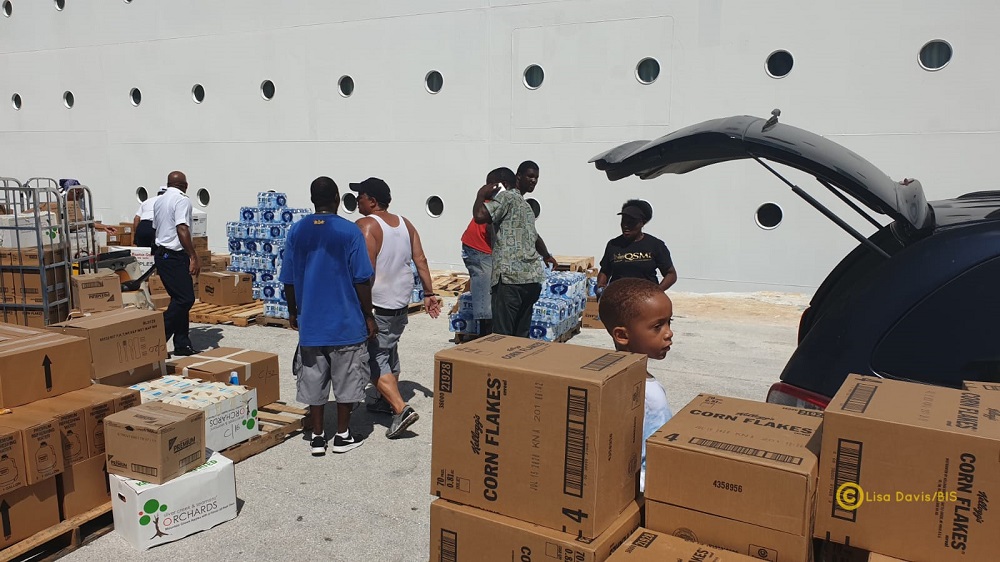 #Freeport, GB, September 13, 2019 – Bahamas – On Wednesday morning World Central Kitchen, owned by chef and philanthropist Jose Andres, arrived in Freeport Harbor, with thousands of already prepared meals, as well as tons of dry goods and other relief supplies. Chef Andres has joined the many international volunteers who have opened up their hearts and storehouses to the people of Grand Bahama in the aftermath of Hurricane Dorian.

“The outpouring of support from both the Caribbean and our international partners has been tremendous,” said Senator Jasmin Dareus, who is working closely with the National Emergency Management Agency (NEMA) in the distribution of supplies.

According to Florida Governor Ron DeSantis, Floridians have raised more than $11 million for hurricane relief in The Bahamas.

Royal Caribbean Cruise Line has stood strong behind its commitment to supply some 10,000 per day to Grand Bahama, along with other supplies like pallets of water, canned and dry goods.  Freeport Harbour has become a beehive of activity every day since the restoration effort began.

Carnival Cruise Line has also made significant commitment to assisting Grand Bahama during this time of great devastation.

From as early as 6:00 a.m. to later into the afternoon, charitable organizations, churches and other civic groups are in an out of the dock, collecting supplies for their respective organizations. They in turn will distribute the goods to their respective communities.  “What’s going on here is this place has become our official point of distribution to all of the centers, shelters, churches and other organizations,” Senator Dareus pointed out, while dodging moving forklifts and people claiming supplies.

“Right now there are 35 shelters and centers across Grand Bahama, from West to East End and what we do is ensure that every day these centers are filled with breakfast items, lunch, dinner, snacks, water and other necessary items. There are more than 20,000 such meals per day and at this point we have already distributed over 100,000 meals, along with cases of water, canned goods and other relief supplies.”

But the Senator is ensuring that not only do churches and other groups who show up for their supplies receive those supplies but, working closely with NEMA, that they take food and supplies to those who may not be able to get to the harbour to collect provisions.  Because of severe flooding caused by Hurricane Dorian a number of government and private citizen vehicles were damaged and out of commission. Senator Dareus added, “Working along with NEMA, Senate President, Kay Forbes-Smith and I assist in ensuring that the meals get to individuals within the community.  There are people who are unable to get out because of flooding, but these individuals need to be fed and to receive supplies.  We cater to the Children’s Home, to the Rand Memorial Hospital and every shelter on this island.”

In addition to the aid that’s coming in from the United States — Japan, China and Caribbean islands have committed themselves to supplying aid to both Grand Bahama and Abaco, the two islands hardest hit by the Category Five Hurricane Dorian.

Senator Dareus thanked all of those nations and countries who have come to the aid of The Bahamas generally and Grand Bahama, specifically.

Header: Individuals from churches, civic and charitable organizations make frequent trips to Freeport Harbour to collect donated items to distribute within their communities and to victims of Hurricane Dorian. The supplies have been donated by a number of international donors from the United States, the Caribbean and other parts of the world.