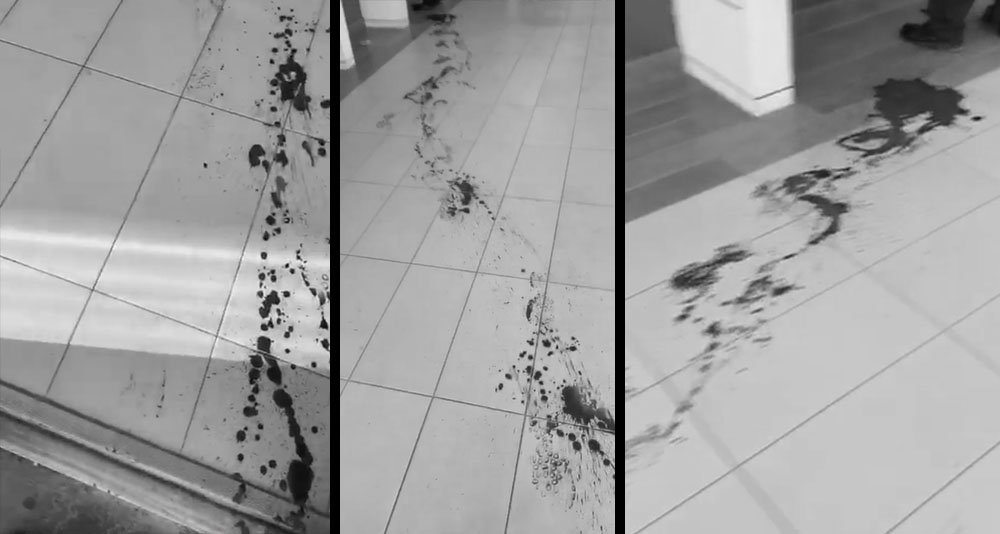 #Providenciales, August 24, 2019 – Turks and Caicos – The crime was outrageous and the scene left behind caused an outrage as residents wrote to Magnetic Media about the bloody mess left at the largest ATM center of CIBCFirstCaribbean.

A cell phone video captured the blood of a victim, spilled on the floor after he had been shot and robbed while using the facility on August 7, 2019 around 12:33 am.  There are blood drops and splatters stretching from the door to the machine and though the crime had occurred the in the wee hours of the morning according to the police report, the blood was still there when the sun came up – unsightly, undignified, unhealthy and uncleaned.

Magnetic Media has been trying to get a statement to explain why the site was not cleaned up before customers were allowed to enter the area for weeks now from CIBCFirstCaribbean Bank.

‘The scene you described contained evidence that was part of an ongoing police investigation; it would have been imprudent to tamper with it until the Police had completed their job on site…” said Larry Lawrence, General Manager, CIBC FirstCaribbean Bank.

At the end of the video, you can see a man standing very near to a pool of the victim’s blood, using the ATM in spite of his surroundings.

It is confirmed, by the Department of Environmental Health that a business is obligated to clean up after a crime.  Blood spread all over the floor of a business open to the general public, is a definite health hazard.

But TCI Police Commissioner Trevor Botting, in a reply to our news organization says the misstep was committed by the Police, not the bank.

““It is clear that once the crime scene examination was completed by the attending officer/s, the scene was not cleaned prior to the public being allowed access, said Commissioner Botting whom we asked about the matter this past Thursday.  On Friday, he offered some explanation and an apology.

This was clearly an oversight. Whilst it is not the job of the police to clean the scene, it is our responsibility to ensure that scenes are rendered safe before the public is allowed access.  To that end, I am sorry for the oversight and any distress caused to the public. As your Police Service, we have learned from this experience and I am confident that it won’t reoccur”.

Police Commissioner Botting also informed that evidence in the case, where a lone gunman got away with a man’s cash and car is safe and sound.

“I am satisfied that this was an isolated incident and that the evidence collected was not in any way compromised.”

The investigation remains open.  There is no update on the condition of the victim.  And naturally, all these weeks later, the ATM center at CIBCFirstCaribbean Bank is cleaned up.