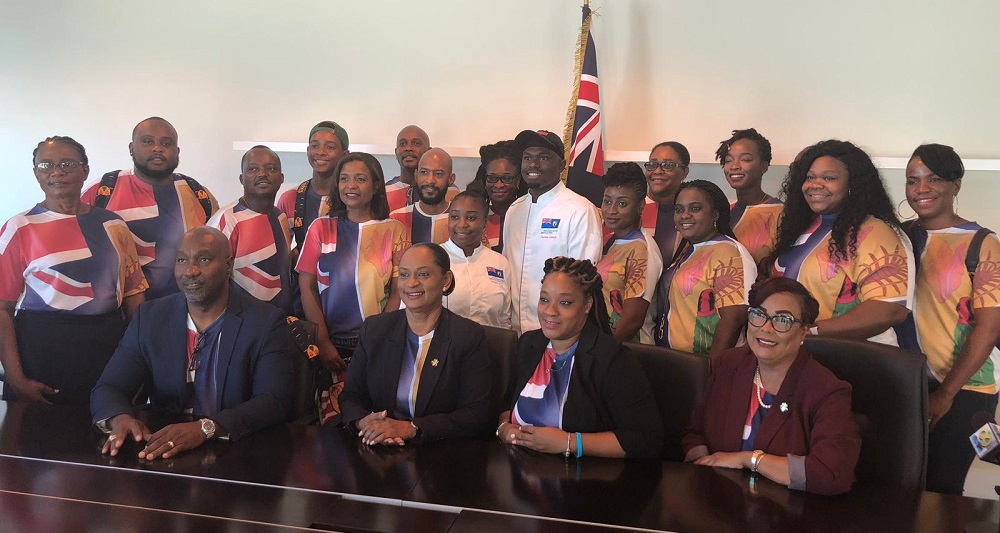 #Providenciales, August 13, 2019 – Turks and Caicos – The expectation is that bodacious participation at this year’s CARIFESTA XIV to be staged in Trinidad and Tobago will leave a stronger impression about the Turks and Caicos Islands at the cultural extravaganza which spans 10-days and includes 20 countries.

Culture Director, Ludwina Fulford said the size of the contingent truly captures the diversity of the Turks and Caicos Islands.

“This time we are able to showcase Turks and Caicos a little bit more; we are so excited to have this team with us and we want to say thank you to them for accepting the invitation to come along with us.”

Turks and Caicos’ last contingent was considerably smaller; three people represented the 40 islands and cays in Barbados in 2017.

On Monday, Minister of Education, Youth and Culture, Karen Malcolm announced that a new partnership between the Department of Culture and the TCI Tourist Board has ballooned the TCI’s representation.

“This year, the Culture Department will be joined by 27 persons who will be travelling with us on intervals – they are not going to be there for the full 10 days, but we have nineteen other countries that will be participating,” said Minister Malcolm at a press conference held at the Office of the Premier.

Among those countries slated to be at the 2019 installment of CARIFESTA are nearby Haiti, The Bahamas, Jamaica and fellow British Overseas Territories, including the Cayman Islands and Montserrat.

Training Manager at the TCI Tourist Board, Blythe Clare is Ambassador for the group.

“If anyone wants to know information about the TCI, accurate information, I am the go-to person.  I am so happy to be a part of the exposure and the interaction with our Caribbean friends and neighbours, (this) will indeed give us a lasting impact. We, in Turks and Caicos are proud of our heritage and culture.”

The Turks and Caicos Islands will participate in the opening on August 16, country night, culinary, music, visual arts, gospel, dance, Grand Market and the TCI will showcase at the Youth Village.

Permanent Secretary at the Ministry, Wesley Clerveaux said it is a fulfillment of responsibility to educate about Turks and Caicos culture both within the islands and outside of them.

“Other country’s delegations are typically huge and so this is a beginning for us to get on the international stage, not only to see what they have to offer but also to promote our culture. It’s taking our brand out there, promoting it,” said Mr. Clerveaux.

This is the fourth time for the TCI at CARIFESTA and this 2019 Turks and Caicos Islands delegation is the largest.

Travelling to Trinidad and Tobago will be the Minister, Permanent Secretary, Department of Culture and TCI Tourist Board plus, Keno & Kaz, recording artists; popular V-6 band representative, Edric Smith; from the TCHTA, Nicholette Thomas; Hezron Henry, local artist, who showcases internationally; Robyn Hinds, award-winning gospel singer; award-winning chef, Charles Joseph; Christian Green, will also represent in culinary arts; Daphne Forbes is beloved for her straw work and the Handfields of Sax O’ Pan Serenades will take their melody of saxophone and steel plan on the road.

Social media will be used to keep Turks and Caicos Islands’ residents aware of the highlights.