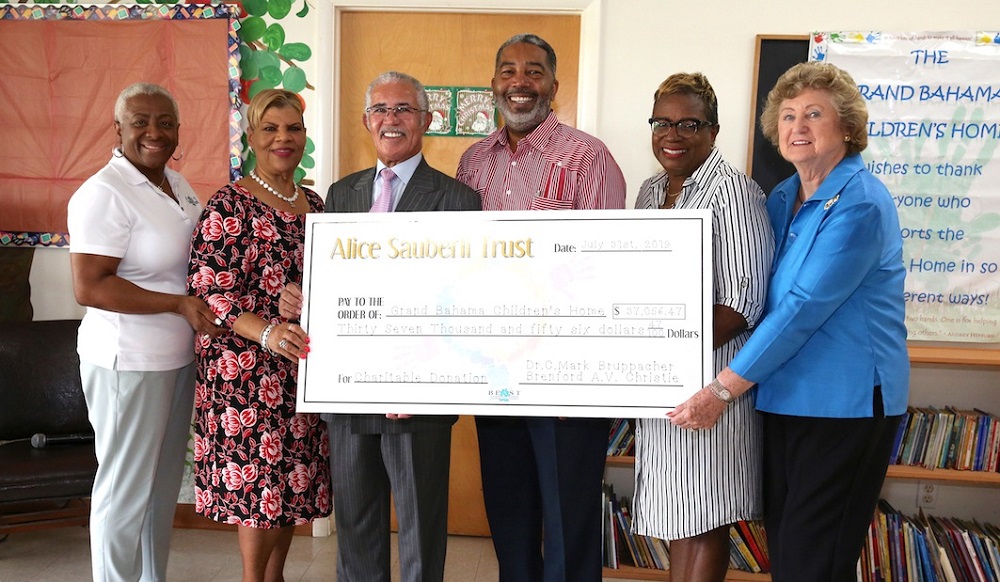 The Home was the recipient of over $37,000 from the Alice Sauberli Trust, the remaining deposit of a long-established fund.  During the check presentation, Minister Campbell said that the government values such partnerships.

“As the Minister of Social Services, I indicated from day one that no government can do what it needs to do on its own,” said Minister Campbell.

“I’m aware that the Ministry of Social Services has partnered a long time with the Grand Bahama Children’s Home.  I look at how young former Prime Minister Hubert Ingraham looked in those photographs during the opening of this facility in 2001.”

He noted certain parts of the building still look fairly new — a testament to the board’s serious commitment as custodians: “As a result, I’m sure that all of it translates positively into the lives of the children.”

Minister Campbell said that in his Ministry, there are three things that are very important to him – children, older persons and those with disabilities.

The children are important to him, he said, because they represent the future of the country. Adding that whether they are living at home or in an institution like the GB Children’s Home, they will all eventually be integrated into the larger society: “The children belong to all of us adults, so all of us have an obligation to the children,” said the Social Services Minister.

He thanked Mr. Brenford Christie, who headed the Alice Sauberli Trust, for his influence and his assistance to the GB Children’s Home.

“I know you spoke about not wanting to do things for publicity, and while I respect your need and want for privacy, I beg your indulgence for allowing us to tell the public a little about you and about what you have done,” Minister Campbell told Mr. Christie.

“It is moments like this that enable us to sensitize, to bring awareness to what is being done here and to bring those needs to the forefront for other companies, businesses and individuals who are able to assist, to step up and do their part to assist places like the Grand Bahama Children’s Home.”

He expressed the gratitude of his Ministry for the generous donation, adding that the children who reside at the Home will be the better because of such generosity.

Second Insert: During a tour of the Grand Bahama Children’s Home, Minister of Social Services and Urban Development, the Hon. Frankie Campbell is informed about the establishment of the nursery in the Home.