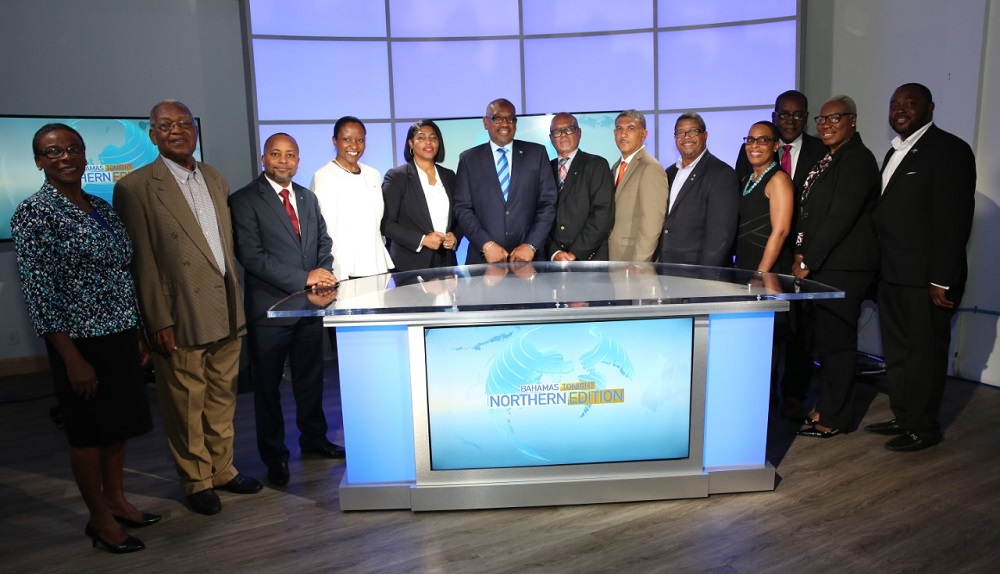 #Freeport, GB, July 27, 2019 – Bahamas – Prime Minister, the Most Hon. Dr. Hubert Minnis affirmed that Bahamian journalism should maintain the best practices of the profession and fulfill its indispensable function in a democratic society as he addressed the launch the second phase of the Broadcasting Corporation’s Hi Definition (HD) Television platform at the Northern Service, today.

With the achievement of full HD digital, Prime Minister Minnis said it is essential that the journalists at ZNS continue to improve their skill sets and knowledge base in Bahamian civics, history, and international current affairs, and provide accurate and timely news and information.

He observed, “These days, the Bahamian people, like others around the world, are being assaulted and misled by fake news disseminated in lightning speed on social media. They are also misled by some who have no journalistic training, and who are quite often ill-informed.” As such, he highlighted the responsibility of the broadcasters, and others in the profession, to bring balance.

Prime Minister Minnis noted that the new equipment installed at the Northern Service completes the entire digitization of ZNS.

“ZNS has come a long way, having evolved out of the Bahamas Telegraph Department,” said Dr. Minnis.  “Tonight marks 42 years since the opening of ZNS television in 1977.   I trust that the broadcasters at the Northern Service will embrace the opportunity that this upgrade provides to improve programming in terms of technical quality and content.

“Let me encourage the Northern Service here in Grand Bahama to provide enhanced local programming. These may include more live interaction with New Providence in the morning television show and enhancements in regular news updates, the evening news and television specials.

“Whatever technology is used in whatever age, it is the quality of producers, directors and journalists who make the difference in broadcast journalism.”

Prime Minister Minnis said that even as ZNS has now become fully digital, the Government of The Bahamas has embarked on a revolution in digital technology that will boost national development throughout the islands of the Bahamas.

He noted that the use of such advanced technology will reduce the cost of government, especially in a far-flung archipelago, such as The Bahamas.

“A few months ago, we signed a $30-million-dollar loan with the Inter-American Development Bank for the digital transformation of government,” said Prime Minister Minnis.

“This digital transformation initiative has three components: simplifying and digitizing government procedures; strengthening institutional capacity for a digital government; and enhancing transparency and accountability in government.

“This digital transformation program, will give rise to a single window for doing business with government in order to improve the ease of doing business for Bahamians and for international investors.  It will also support the implementation of the Freedom of Information Act, which is a part of our efforts to deepen democracy.”

Prime Minister Minnis said the digital transformation of The Bahamas is rapidly gathering momentum, as the government seeks to ensure that The Bahamas utilizes the technology necessary for every island to take full advantage of the 21st Century global economy.

LAUNCHING FULL HD DIGITAL IN THE NORTH – Prime Minister, the Most Honorable Dr. Hubert Minnis was the keynote speaker, July 26, 2019.  On stage in the background is Mike Smith, Chairman of ZNS, and Darren Meadows, in charge of Production at ZNS.

PM AT MASTER CONTROL – Prime Minister, the Most Hon. Dr. Hubert Minnis gets a chance to take over the main board of Master Control in the studios of ZNS Northern Bahamas, during a tour of the facilities on Friday, July 26, 2019 as a part of the official launch of full HD digital programming in the North.

NEW STUDIO, NEW LOOK – Prime Minister Minnis (centre), along with Deputy Prime Minister, the Hon. K. Peter Turnquest (5th right); Minister of State for Grand Bahama, Senator Kwasi Thompson (3rd left) and Parliamentary Secretary in the Office of the Prime Minister, with responsibility for Information and Communication, Pakesia Parker-Edgecombe (5th left) are joined by executives of the Broadcasting Corporation of the Bahamas in the newly renovated studios of ZNS Northern Bahamas, during a tour of the facilities on Friday, July 26, 2019.

CUTTING THE CAKE – Prime Minister of the Bahamas and Minister with responsibility for Broadcasting, the Most Hon. Dr. Hubert Minnis, gets a helping hand as he cut the cake in celebration of the launch of full HD digital ZNS Northern Bahamas, following an official ceremony on Friday, July 26, 2019 in the Harold DeGregory building.