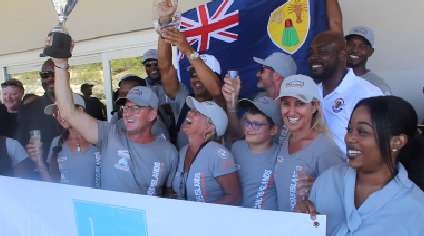 #Providenciales, June 11, 2019 – Turks and Caicos – A Turks and Caicos team came home with six major prizes after participating in what is dubbed the Caribbean’s #1 motor racing event, the Sol Rally Barbados and among the honours earned was fastest BMW in the race awarded to Team TCI by the German luxury car company.

The Hartling Group is typically known for its luxury resorts in Providenciales: The Palms, the Sands at Grace Bay and the new Shore Club but there is an adrenaline pumping reputation for the team, which this year had its best year at the Sol Rally Barbados.

“We are pleased to say that Turks and Caicos really took it over this year, its unbelievable!  We had a hundred teams come into this rally from 13 different countries that were represented and to be able to come out of that with the results that we did was honestly overwhelming for us,” explained Stan Hartling amidst a crush of media and Hartling Group resort staffers.

Turks and Caicos is now a well known team and place within Barbados and among rally fans thanks to the showing at the Sol Rally Barbados which marked its 30th year in this 2019 staging of the event.

And the feats of this team were hard won as challenges were not only on the race course, but within the vehicles themselves.  Magnetic Media is informed that Stan had to race on a flat tire at a point in his event; Paul had to drive with one hand on the wheel, the other holding the door which had a broken latch for a part of his course and young Sam Hartling in his first showing at the Sol Rally Barbados sped his way from 91st place to taking over half the field ahead to complete his debut on the motoring scene.

Some sponsors of the team were on hand for the rousing return home on Tuesday at the Providenciales International Airport; named were Bambarra, Arbike Vodka, Java Island, Horizon Construction, Hartling Group Resorts and Grace Bay Car Rentals

“What an incredible year, this is our tenth season and we had five rally cars registered and all five cars finished; so not only did we class first, second, third, fourth and fifth in finishing, we classed overall…” said Carmela Giardano-Horton who added, “this group right here is extended family and we have such a presence over there and we just hope that one day we can bring rally to Turks and Caicos.”

A must do pit stop for the team, broadening the membership of the Turks and Caicos Motoring Club to the youth of the TCI; talks are already ongoing with the Department of Sports.