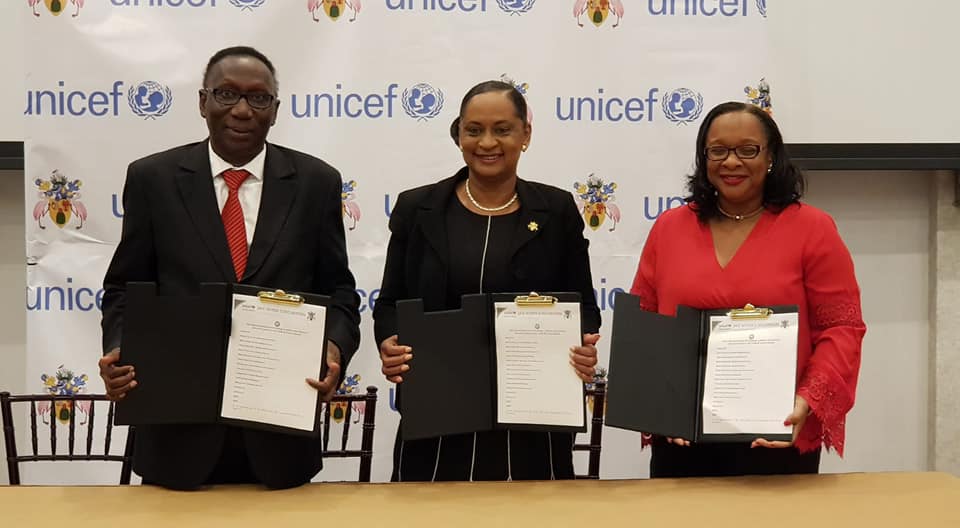 #Providenciales, June 18, 2019 – Turks and Caicos – ‘National Leadership’ and ‘Political Will’ are keys to curbing the disastrous effects of climate change on public infrastructure, and last week Thursday the Turks and Caicos Islands officially joined forces with a global partner to ensure schools are stronger and safer.

The Turks and Caicos Islands Government and UNICEF (Barbados & Eastern Caribbean Office), together signed the Safe School Declaration ahead of a two-day conclave held at the Shore Club on Long Bay Beach.

“As the United Nations Secretary-General, Antonio Guterres said while addressing the General Assembly last September, Climate Change is moving faster than we are…”  reminded Dr. Aloys Kamuragiye, the UNICEF Representative for the Eastern Caribbean who brought remarks at the opening of the Safe School Declaration.

It was explained that the pact will drive practices and policies so that schools are less affected, students and faculty are better equipped to respond in disasters or emergencies and learning is uninterrupted when disaster strikes.

The Safe School Initiative, explained the Ministry of Education, Youth, Culture, Social and Library Services ‘is an inter-governmental political commitment that provides countries the opportunity to express support for protecting education from disasters, conflicts etc.; the importance of the continuation of education pre-during and post disaster and the implementation of concrete measures to deter the community using the School as a shelter or relief camp.’

“There is no room for business as usual.  Investment in resilience, Turks and Caicos, is a must.  It must be among the top priorities, “said Dr. Kamuragiye who added that, “Investing significantly in disaster risk reduction will allow Turks and Caicos Islands to achieve a critical outcome.”

The UNICEF Representative was emphatic that the commitment to the Safe Schools global initiative demonstrates accountability and works to protect physical and environmental assets, as well.

“It is timely that Turks and Caicos Islands commit to implementing the right measures to strengthen safety in school settings.  The education system is to do its share in implementing national resilience, actually.  Education plays a crucial role in reducing vulnerability and building community resilience furthermore it is essential for empowering people…”

The hurricanes of September 2017 devastated public infrastructure in the TCI and Ministry of Education schools were hardest hit.

There was no school for over a month for some schools, while others were temporarily displaced and at least two public primary schools remain in alternative locations while their campus structures are rebuilt.

UNICEF is admonishing the Turks and Caicos Islands Government to establish and adhere to safe school policies in an earnest effort to catch up with climate change, to minimize interruptions in learning and to protect students’ and teachers’ lives.

“Schools should incorporate disaster resilient structures according to government policy, while at the same time calling for knowledge and awareness of hazards.”

The Declaration was signed on Thursday June 13, 2019 at the Safe Schools Declaration which was hosted by the TCI Ministry of Education in association with UNICEF, Ministry of Tourism, Environment, Heritage and Disaster Management and supported by Caribbean Disaster Emergency Management Agency and the Turks and Caicos Islands Community College.