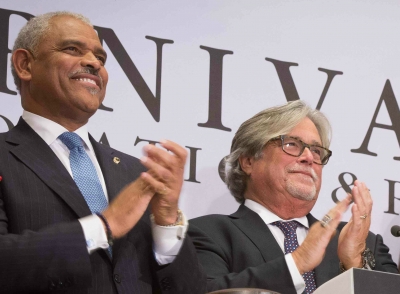 #Providenciales, June 5, 2019 – Turks and Caicos – It is unclear if the Turks and Caicos and The Bahamas stand to receive any compensation for pollutants in sewage and plastics reportedly dumped into their country’s waters by Carnival cruise ships but the judge in the high stakes, high profile legal matter reminded Carnival Corp that if they did not have the environment, they would have nothing to sell.

Top executives of the world’s largest cruise line company on Monday appeared in US District court in Miami, Florida to face Senior Judge, Patricia Seitz in person after an agreement was reached with federal prosecutors.

Carnival CEO, Arnold Donald in open court admitted being responsible for probation violations.  Online media news reports quote Mr. Donald saying, “The company pleads guilty.”  This was said a total of six times as Mr. Donald added that he was in the courtroom to formulate a plan to fix the so called, ‘shortcomings of the company’.

News reports also revealed that Carnival has confessed to dumping food waste and plastics in Bahamian waters along with other infractions which violated its probation conditions from a previous agreement where the company paid $40 million in 2016 for illegal dumping.

While the judge expressed that jail time would be the more suitable punishment, she has agreed to a deal which forces Carnival to pay a punitive sum of $20 million and late penalties as high as $1 million per day.

Carnival on Monday promised to be committed to audits to ensure there are no future violations, restructuring of the company’s compliance and training programs, a better system for reporting environmental violations, a reduction in the use of single use plastics across the entire fleet and a special team to improve how the ship’s food and beverage waste is handled at sea.  Up to news publication time, there was no response to Magnetic Media questions to either The Bahamas or Turks and Caicos governments.