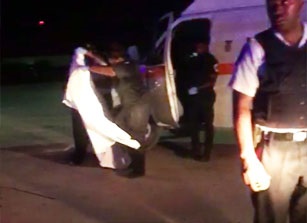 #Providenciales, May 1, 2019 – Turks and Caicos – A decline in most serious crimes is being reported by the Royal Turks and Caicos Islands Police but missing is how well the Force is doing in detecting or solving the crimes which are committed and the impact of CCTV cameras on crime detection and reduction.

Police Commissioner James Smith yesterday informed via a statement that, we have seen a continued drop in crime overall when compared to the same period last year. We have achieved a reduction of 3 percent when compared to 2017/2018, with 94 fewer crimes reported.”

This has been the trend, that crime is reported as decreased by Police yet residents continue to feel threatened by the criminal element which appears to getting more violent and targeting tourism.

The feelings of the residents and visitors are not unwarranted either; the Police Commissioner is also concerned about the soaring murder rate.  Four people were murdered in 2017 and that leaped to eight murders in 2018. Already in 2019 and all recorded this April, there are three homicide investigations after three young men – in separate incidents – were killed.

While we welcome this decrease, it is concerning that the murder count has risen from 4 in 2017/2018 to 8 reported during the 2018/2019 period. These crimes have a major impact on the country and we continue to use all available investigative means to arrest those responsible.

Very slight differences were recorded in drug offences and crimes against tourists.

From 79 reports in 2017 to 66 reports of possession of drugs last year and when it comes to tourist reports of crime, there was an almost invisible change.

“We work very hard to protect our highly valued tourist sector and compile statistics to re-assure visitors and investors that the country remains a very safe destination. In this regard crimes against tourist have seen a modest reduction from 64 in 2017/2018 to 62 in 2018/2019. Again, this follows a downward trend from the year 2016/2017 when there were 108 incidents,” said the Police Commissioner.

There were some reported mammoth-sized reductions in crime; information that gun crimes were down nearly 50 percent is certainly welcomed and robberies, also had double digit decrease at 17 percent less reports in 2018 than in 2017.

Magnetic Media has requested additional information, including an update on the effect of adding CCTV last July.  CCTV camera surveillance, in its second phase this fiscal year, is due to be activated in Grand Turk.