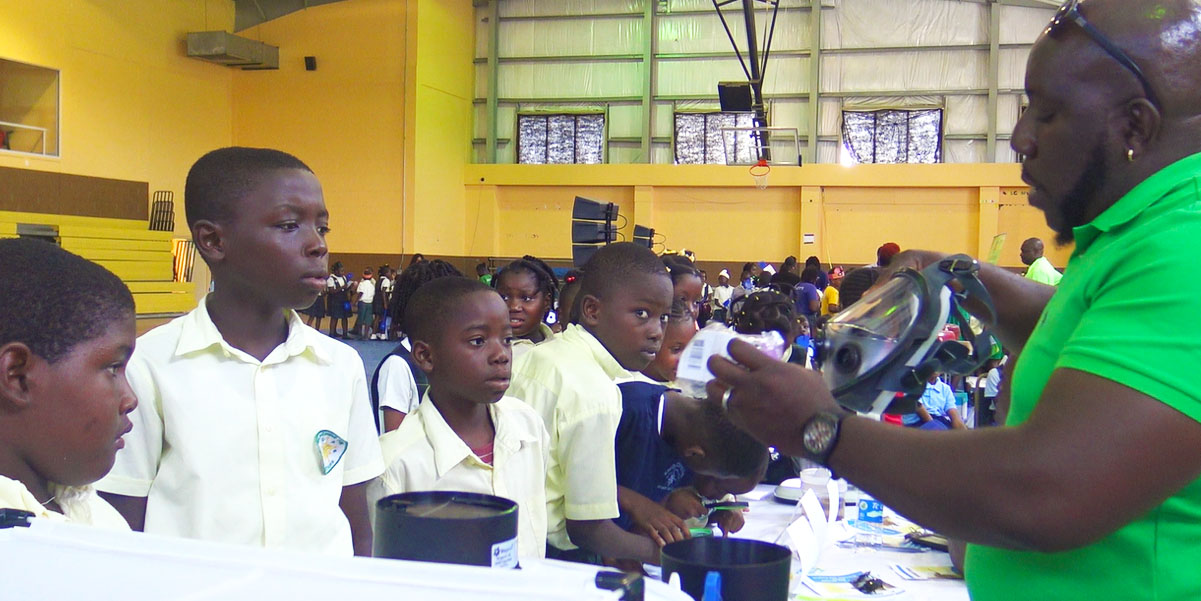 #Providenciales, May 9, 2019 – Turks and Caicos – Students and teachers and others who attended the Vector Control Awareness Month Fair walked away thoroughly educated due to the informative and interactive expo put on by the Environmental Health Department and its partners.

“The planning phase was about nine months and I told them I wanted something that was going to be better than what we have been doing over the last two to three years, so they came up with this and we had the support from the Ministry and all of our other stakeholders,” shared Kenrick Neely, Environmental Health Director.

From 9 a.m. to 4 p.m. there was a steady stream of residents to the Gus Lightbourne Gym who came to learn about vector control efforts, the players in the industry and what role they individually play in reducing the negative impact of vector agents.

In the Turks and Caicos, more commonly the focus is on reducing rodents, fleas, ticks, flies, roaches and the most troublesome of all, mosquitoes.

From an art and craft area where children learned while constructing rat and mosquito head-wear, to a spot for learning about and collecting mosquito-eating guppie fish for water tanks; to an on-site mini-laboratory where you could get an up-close look at dead roaches and mosquitoes; to learning about the equipment and materials the Environmental Health Department uses to keep mosquito populations down… it was an outstanding experience according to those to whom Magnetic Media spoke.

Oseta Jolly Primary student, Sharif O’Brien articulately commented: “I think the government did a good job hosting this, because I really learned a lot and I can share with my classmates what I know about the mosquitoes and the vectors etc.…” the ten-year-old continued with a response to our question on what was the most intriguing factoid of the day for her.

“How something so small could have such a big effect on your body, like a mosquito.  I was really surprised about that!”

A theatre setting featured a mini-movie edited by the EHD team; the star of the flick was the ‘rat’ and the focus was on the magnitude of a rat problem; we learned that a male and female rodent can breed their 15,000 offspring in a lifetime together.  There was also a movie on the mosquito.

The Department of Agriculture, Parkway Pest Control and Truly Nolen (pest control) were a part of the expo with advice for home and business owners and naturally, the very curious children who attended with their teachers.

Pretty ideas for patios to keep mosquitoes at bay and three hilarious mascots were also at the Vector Control Awareness Month Fair; namely a Rat, a Fly and a Mosquito.

Students were thrilled to take photos with the trio of vector agents and to walk away with fly swatters, prizes from games set up at the fair, reusable shopping bags, plants and larvae eating fish.

Next stop for the Vector Control Awareness Month fair is South Caicos on Monday; North and Middle Caicos next Tuesday and Wednesday and dates for Salt Cay and Grand Turk are to be announced, said Kenrick Neely, Environmental Health Director.