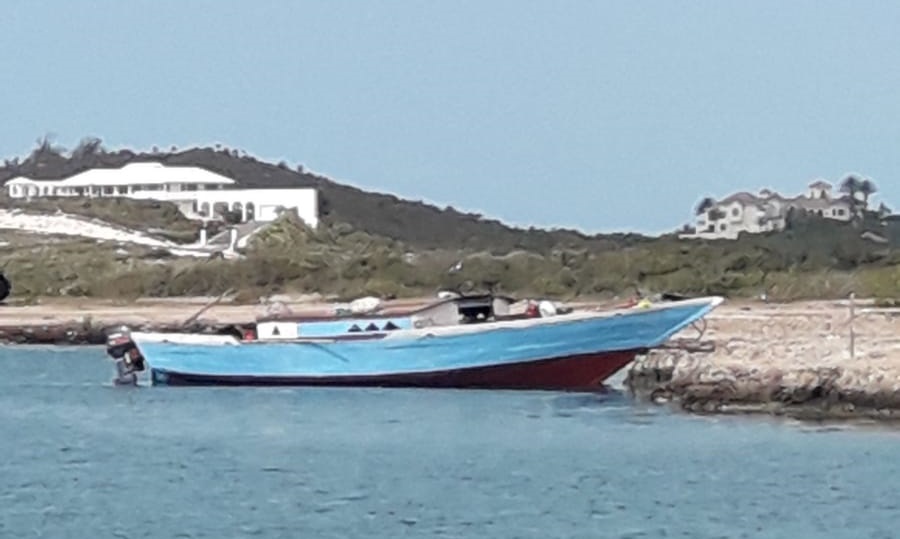 A Government-issued media release said: “Currently eighteen (18) males and one (1) female were apprehended from the vessel landing and are being processed at the Detention centre. One gentleman had to be hospitalized for medical attention. Further searches will continue as others are feared still at large from the vessel.”

Two of those accounted for after the landing are dead; found lifeless in the waters were two males said that report.

The TCI Police is not calling it a landing though, as they were summoned to the scene where the boat was still on the water and there was an attempt to intercept when some of the migrants tried to evade capture.

“In an effort to avoid interception and detention, persons jumped into the water and began swimming toward the shore and ran into the nearby bushes. Two deceased persons were later recovered by Marine officers and handed over to officials.”

It was explained that a call to 911 minutes before 11 p.m. on Tuesday activated a team of law enforcers from the Ministry of Border Control.

“The Enforcement Unit of Division B of the Immigration Department responded to a call from the 911 Centre at 10:57 p.m along with the Royal Turks and Caicos Islands Police Force attended the area.

All agree that 19 people were taken into custody and those 19 individuals, said Immigration Department, add to the count of 59 people who are being held at the South Dock Road Detention Centre.

The number of people housed at the Immigration Department managed-site was up to 64 before this latest group of illegal migrants from Haiti; but early today five detainees escaped the premises and are at-large.

A description was given of the vessel used to make the break into the Turks and Caicos Islands.

“The predominately light blue vessel carrying the illegal immigrants is approximately 28 -30 feet in length and was propelled by two outboard engines.

As mentioned in the official statement, issued by the Acting Border Control Minister, Sharlene Robinson, there is feared to be even more illegal Haitian migrants at-large.

A stern reminder on the penalties in the TCI for human smuggling and harbouring was issued by both Official Offices:

The public is also reminded that it is an offence to harbour or assist illegal persons and that persons found guilty of harbouring are liable to a fine of US$20,000 or a term of imprisonment of four years, or both in accordance with the Immigration Ordinance 2018 or any law. The public is also requested to provide the Police with tips or any information related to this or any other illegal landing. Tips can be submitted anonymously in English, French or Spanish on either www.crimestoppers.tc or on Facebook as a fan of Crime Stoppers Turks & Caicos. Crime Stoppers tips are received in the USA.