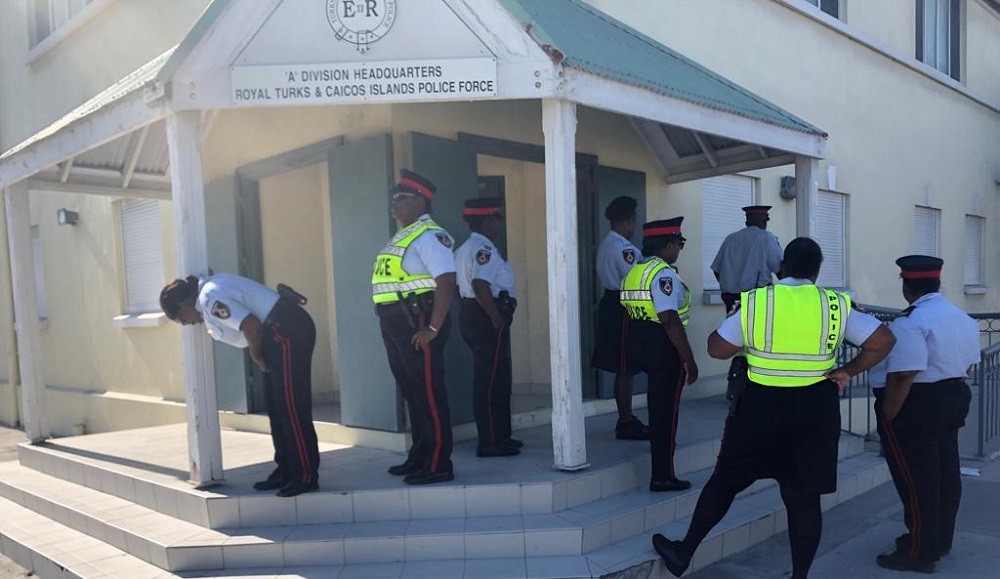 #Providenciales, May 11, 2019 – Turks and Caicos – Images of TCI Police officers standing and working outside of the Grand Turk Police Station, one even appearing to be vomiting or spitting, were explained as the result of an age-old plumbing problem within the precinct.

Toilets reportedly overflowed with sewage and forced everyone outside.

Magnetic Media contacted the Police press officer and it was explained that the is an old problem was exacerbated by the damages caused during the 2017 hurricanes. More than two year later

“Since hurricane Irma many buildings require significant remedial work. Government has made funding available and Grand Turk police station is one facility that is to undergo significant work. However there has been an ongoing challenge with the toilets within the cells area of the building which have had work done on them in the past.”

Prisoners had reportedly been complaining about malfunctioning toilets and today, well the sewage literally hit the fan and forced members of the Force outdoors for a while.

Social media chatter strongly condemns the conditions under which Grand Turk Police Officers have had to work.  Pointing to more than the broken toilets; describing the facility as general nasty looking.

The media statement issued this evening further explained: “Following a recurrence of this problem an emergency plumber was called to provide what will be a temporary fix until a proper long-term fix is done. Understandably this produced difficult working conditions and we have ensured an effective cleaning takes place to make the building useable. We will keep the situation under constant review to ensure the comfort of staff and persons using the station.”

Our media company is told that “a Haitian man” was made to clean the sewage mess and officers were expected to return to inside the building.

Police media officer said officers were unable to return to inside the Grand Turk Police station, however.