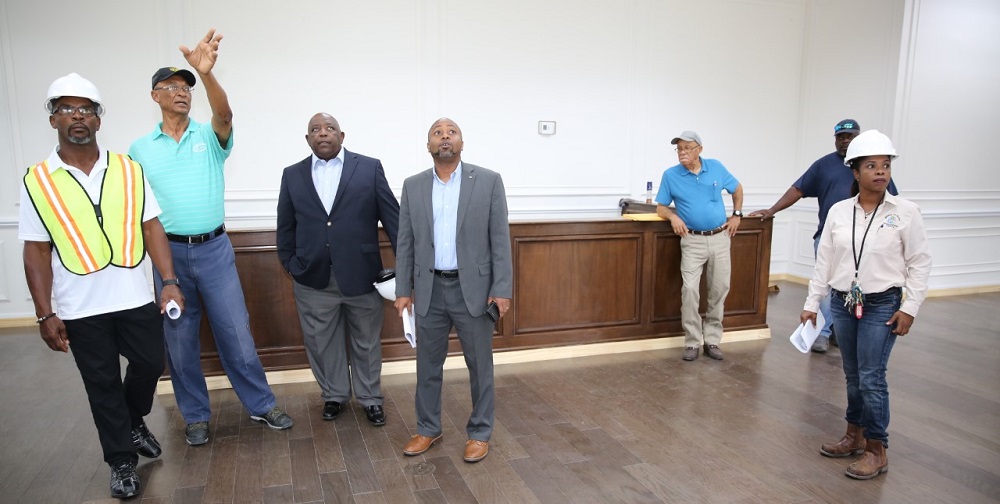 “In spite of how it appears, work has continued to progress on the court house and we’re very, very pleased with what we have seen so far,” Minister Thompson told the media following the tour.

It was in November of 2018 when the Government of The Bahamas signed a $1.9 million contract with Noula Investments Limited for repairs to the court house, which had been damaged following the passing of Hurricane Matthew.  Extensive repairs had to be carried out on the facility, including a major overhaul of the entire roof of the building. “That was one of the big ticket items that needed to be completed and has been done.”

The Minister noted that the work on the Supreme Court is almost completed, with a new floor, new fixtures, furniture, now the focus. During a tour of the Supreme Court, Minister Thompson and his delegation got to see first-hand the new wooden floor that has already been laid and the repairs that have been carried out to the Judges’ Chambers, as well the Jury Room.

“One of the major challenges the contractor has in carrying out this work is that in the midst of all of this, the court has to continue,” noted Minister Thompson.

Once the major repairs have been done to the Supreme Court, workers will turn their attention to the minor damage of the Magistrate’s Courts.

Header: Contractor, Max Quant (second from left) of Noula Investments, points out to Minister of State for Grand Bahama, Senator Kwasi Thompson (right), Parliamentary Secretary in the Ministry of Works, Iram Lewis (left) and Permanent Secretary in the Office of the Prime Minister, Harcourt Brown (second from right) some of the work that has been done on the celling of one of the courtrooms in the Supreme Court, during a tour of the repairs being carried out at the Garnet Levarity Justice Centre.  Minister Thompson led a small delegation to tour the work on Friday, April 26, 2019.  Noula Investments Limited signed a contract with the government for the repairs.

Insert: Minister of State for Grand Bahama, Senator Kwasi Thompson gets a close-up view of some of the duct work being completed in preparation for a new air conditioning system at the Garnet Levarity Justice Centre.