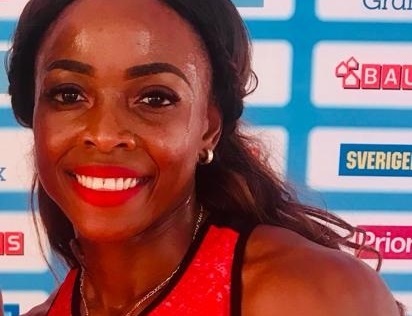 #Providenciales, March 6, 2019 – Turks and Caicos – In her down time, it would be Turks and Caicos rip saw music that would make a play list.  Hailing originally from Jamaica, when I asked about her favorite foods it was no surprise that Jamaican stew peas made the cut, but she’s also gotta have TCI stew conch and peas and rice from her mother-in-law, Enid Smith.

I guess it is all of the running and training she does, but in her free time – this unstoppable athlete just wants to sleep and her pick me up drink, again digs into her island roots and is a glass of homemade carrot juice.

Yanique Haye-Smith is a beautiful, talented young woman who is striving to make her athletics dreams come true and recently; she edged closer to her goals when she smashed two TCI National records in the 200m and 400m events; one of them her own.

The indoor track records were set at the Boston Last Chance Qualifier last month. Shattering the records held by Akia Guerrier; 29-year-old Haye-Smith clocked 23.71 in the 200m and beat her own recently set 400m indoor record, with a faster time of 52.72.

Haye-Smith returns home to Turks and Caicos today; in time to coach the Long Bay High school and support the Inter-High School Track and Field Meet and said, “I started my 2019 track and field season and my main goal was and is to have one of the best times in the world.  So, opening up my season my focus wasn’t on breaking the Turks and Caicos national record because I knew going into the race that I have the potential and was prepared.  This is a great accomplishment and a good start for me.”

She added that she is “trusting the process set in place by my team, husband (coach and manager) and team of family, friends, fans and supporters.” Yanique Haye-Smith is married to Coach Ali Smith, a Turks and Caicos National Coast and member of the Royal Turks and Caicos Islands Police Force.