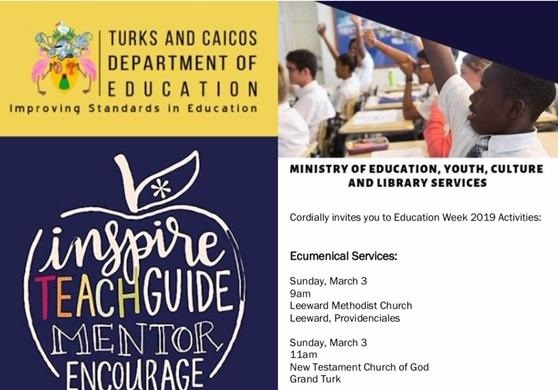 #Providenciales, March 4, 2019 – Turks and Caicos – It is National Education Week and the plans are ripe and rich as education on all levels will be celebrated in grand style across the archipelago.

Today, HJ Robinson High will hold a session on Cyber Bullying while Eliza Simons Primary – also in Grand Turk – will welcome residents at an Open House.

In Providenciales:  Enid Capron will have special devotions; Ianthe Pratt will host its Spirit Awards; Oseta Jolly will have devotions led by male students; a special assembly for stakeholders and students is planned at Long Bay High school and Clement Howell High’s special devotions will be led by the PTA and school prefects.

The theme for Education Week 2019 is Quality Education for Life-long Learners.