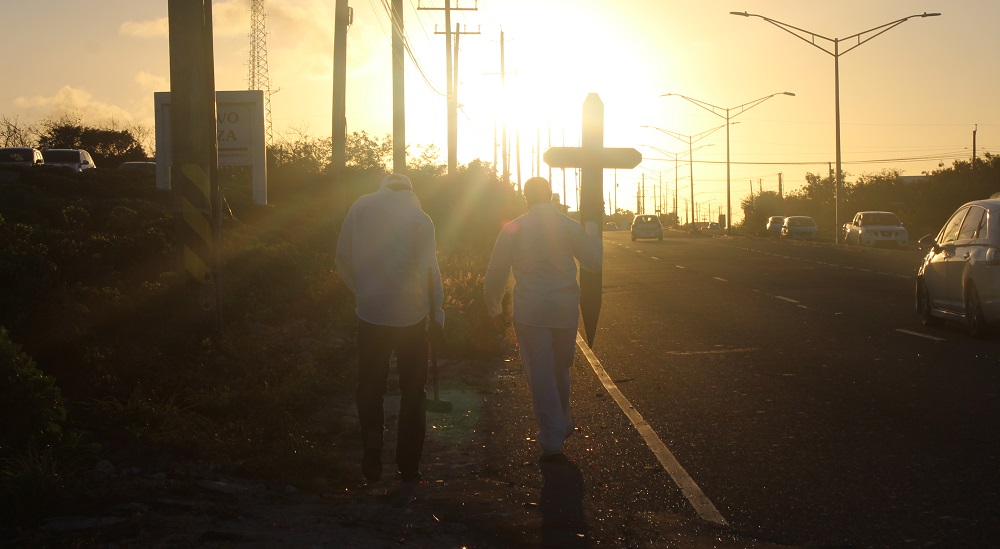 #Providenciales, March 12, 2019 – Turks and Caicos – We had to walk over shards of glass from shattered windshields, walk by broken bits and pieces of his Wrangler Jeep scattered at the scene, stand next to a crumpled rubber glove likely used in the traffic investigation and bear with the undeniable feeling of eeriness which crept in with the dusk… throngs of people most donning white and who knew and loved him marched silently to the final resting place of beloved Turks and Caicos Islands police officer, Constable 223 Mauquency Carter.

Women were wailing.  Grown men were weeping.  Heads were bowed as disbelief mournfully, painfully gripped the scores who turned out for the solemn ceremony for ‘Quincy’, as he was affectionately called.

It would take even a stranger only a matter of minutes to gain a full understanding of the kind of man Constable Mauquency was.  Listening to the loving thoughts, cherished memories and broken hearts of those who knew him best, painted a portrait of a man we could admire, a man of whom we could be proud and a man who would be sorely missed for his effervescent personality.

A member of the Tactical Unit of the Royal Turks and Caicos Islands Police, this night there would have been a unity party for the crew… instead there was a dramatic change in the script.  There was no jovial gathering, this one was solemn but unity was still very much achieved as family, friends and colleagues represented for their “brother’” who was described as a man full of life, a man who lived life fully and a man who was a great father to his two sons.

His grandmother, trembled as she neared the spot where her grandson was fatally injured when his jeep collided and reportedly flipped over, with her ‘boy’ inside. Valeria Houseman is a strong woman, known by all as such, but that strength was fiercely tested this evening as a candle light prayer vigil unfolded a mere 16-hours after Quincy was pronounced dead at hospital.

Supported by her sons and Jericho Baptist Church Pastor, Pedro Williams Mrs. Houseman took measured steps, shaky steps and arrived with tears streaming and clutching a huge floral wreath of blue and white and red until stood at the ‘spot’.  No easy task, yet she handled it with grace and like a champion.

Old hymns were solemnly sung.  Prayer was thoughtfully prayed and a heartfelt message was sweetly rendered.

Pastor Pedro, who knew Constable Carter personally described the young officer as a respectful young man, who was always beaming a smile and encouraged those gathered at the accident site earlier tonight to lean on God for comfort.

“…But ask God to give you the strength during this time to be able to survive and to be able to go through and to be able to move forward from this point.  Indeed we have lost a young man with great potential.  Every time I saw Mr. Carter he was very bright in terms of laughter and the expressions on his face and being very friendly.  He was always very respectful to me as a pastor in the community and always joyous.  I believe today he would not want for you to be sad, but even in that sadness to let your face be radiant and to remember his laugh.”

The Police report explained that ‘Officer Carter was the driver of the grey Jeep Wrangler that was involved in a two-car collision on Monday, March 11, 2019 shortly after 2 a.m. on the Leeward Highway in the vicinity of Provo Plaza.  Officer Carter was transported to the Cheshire Hall Medical Centre where he was pronounced dead at 2:47 a.m.”

Magnetic Media is informed that ‘Quincy’ suffered serious head trauma in the accident.  Images of his jeep, shared on social media gave insight into the severity of the crash; extensive front end and roof damage seemed to support an account that the vehicle flipped over in the collision.

The female driver of a gray Honda car, involved in the accident, was taken to hospital for injuries, said the report.

Police Commissioner James Smith said, “We have lost a very special individual who will be sorely missed.  This is going to be a very difficult time for Carter’s family and for each of us.”

Certainly it is difficult, and evidence of the popularity of and love for Quincy is already apparent as nearly 200 people turned out for the 90-minute service at the scene of the traffic accident.  Minister Jay Morley lent his voice to the vigil, loved ones together sang Officer Carter’s favourite song ‘Stand by Me’ as candles were lit and cell phones were illuminated in a touching tribute to a man, who even in death, has the amazing ability to draw his people together. The memorial wreath was placed at the crash site.

Constable Mauquency Carter was 29-years-old and hails from the island of Grand Turk.

TCI: ﻿An outstanding officer, a true patriot, a good father and a man of respect; his former trainer reflects