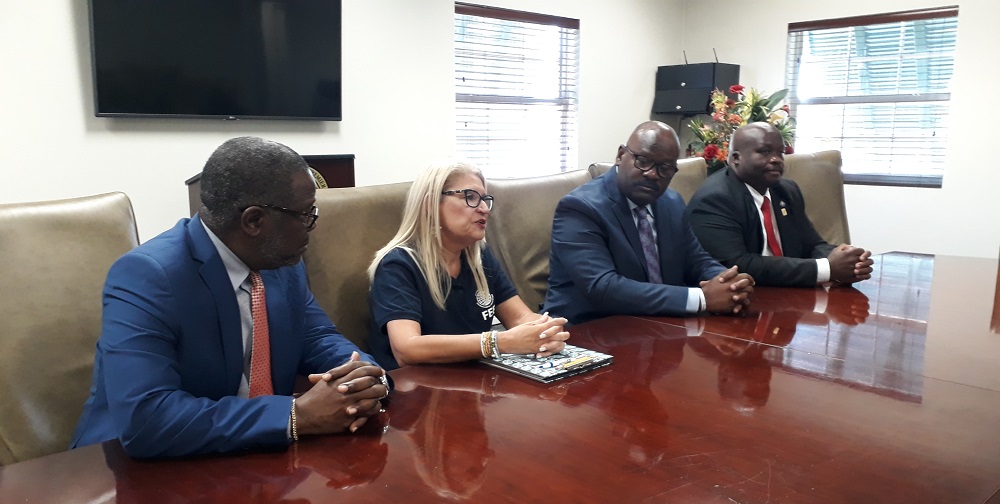 #Providenciales, March 1, 2019 – Turks and Caicos – A return to Blue Flag status for coastal sites around the Turks and Caicos is the hope of the Ministry of Tourism as it has renewed its relationship with the Foundation for Environmental Education, FEE and will regain membership in order for the TCIs world renowned natural habitats to be rated.

Tourism Risk Manager, Brian Been is leading this project for the islands which had in 2008 managed to have three areas:  The Bight Park in Providenciales and both Governor’s Beach and the Grand Turk Cruise Centre in Grand Turk, waving Blue Flags.

Ralph Higgs, Acting Deputy Premier and Tourism & Environment Minister was coy about naming the sites in the TCI he would like to see make the list in a first round of selections, but Mr. Higgs was eager to state that his government is putting its full weight behind environmental protection programs.

“Turks and Caicos is an exceptional place and as the world discovers Turks and Caicos, the world is loving Turks and Caicos and so my government is being proactive in terms of taking steps to enhance environmental awareness to protect our sites and I think we will start, hopefully with about four or five sites that easily accessible, easily manageable and then it will expand throughout the length and breadth of the Turks and Caicos.”

The process will be thorough, explained FEE Regional Manager, Lourdes Diaz who is originally from Puerto Rico.  Ms. Lourdes said it may take up to two-years to secure the first of the Blue Flags and in order to maintain the globally respected status, public education must be constant and public buy-in must be high.

Supporting the FEE visit to the Turks and Caicos was Director of Sustainable Planning for The Bahamas Ministry of Tourism, Earlston McPhee, who said:  “A part of the Blue Flag program is that you have to be recertified every year, so you don’t get there and its done; every year you have to be recertified and the national jury who would ensure that the standards are kept at a high level will be visiting, sometimes a surprise visit to the site to ensure the standard remains very high.”

The Turks and Caicos already stands to benefit from its membership renewal with FEE; Ms. Diaz said because one of the key Blue Flag standards is ‘access for all’ as mandated by the UN World Tourism Organization; the TCI will be supported with infrastructure to make our beach and/or marina sites wheelchair friendly.

“A Blue Flag beach is accessible for all and one of the criteria is accessibility for the physically impaired, that is people with limited movement; they must be taken into consideration.  That is an observance which will be guaranteed through the Blue Flag Beaches. As a contribution to the countries that are participating in Blue Flag, will be able to provide walkways and amphibious chairs for the use at each Blue Flag site.  Everybody deserves the same services.”

The team from FEE met with the Tourism Minister and Risk Manager at the Office of the Premier in Provienciales on Wednesday February 27, 2019.